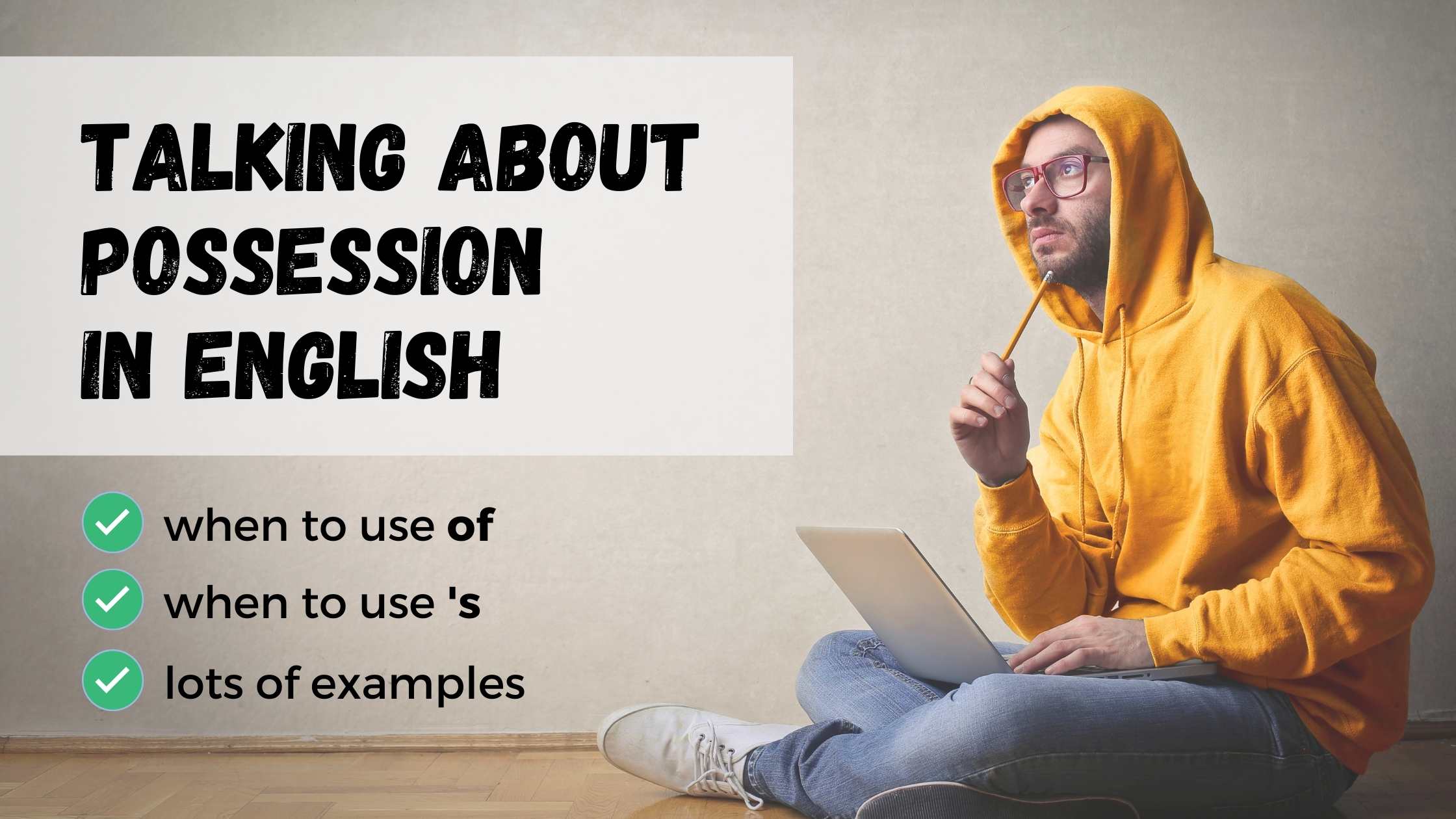 Is it the backpack of Julie or Julie’s backpack? If you ever struggled to decide whether to use ‘s (read apostrophe ess) or of to demonstrate possession in English, you’ve come to the right place. In this blog post, we go over the rules to help you decide which possessive structure in English to use according to the situation you are presented with.

Before getting into the blog post, here are some words you should know about the possessive in English so that you understand the ideas.

How to use the possessive in English

This section teaches you the six rules to properly use the possessive structure in English. Plus, you’ll learn the one mistake that many ESL students make when trying to use apostrophes.

Possessive rule #1 – is the subject animate or inanimate?

The first things you should determine are the owner and the possession of your sentence. For instance, in the sentence “This is Mark’s car”, Mark is the owner and the car is the possession. Mark is a person, so we call him an animate possessor. Animate means alive. Whenever you encounter an animate possessor, such as a person or an animal, you will use the apostrophe s (‘s). Generally, you do not use of in these sentences. Here are three examples:

Use the apostrophe (‘s) for possession of qualities, actions, attributes

We also use the ‘s when we are talking about the qualities, actions, and attributes of an animate subject. However, it is also common to use of in such situations. Here are some examples of the possessive in English:

There are situations when you have to pay attention to the sentence structure more carefully. This is a little advanced though. Basically, the meaning of a sentence can change if you are giving information about the owner instead of the possession. Take a look at the examples below. Which of the options is correct?

If you said (a): congratulations, you’re right! If you got this one wrong, no worries. Here’s the explanation: in option (b), we understand that you met the dog yesterday, not the girl. In option (a) it is clear that you met the girl yesterday and her dog barked all night.

Rule #2 – For possessive adjectives, never use of or ‘s

Do you remember the possessive adjectives? If not, take a look at the table below:

When talking about something animate that refers to a part of a whole we always use of. Take a look at these examples:

However, if we are talking about a part of a unit, it’s okay to use both: the ‘s and the of. Here are two examples which have the same meaning:

Let’s think about nouns that end in s. Here are some of them:

When you encounter them, you have two options to make the possessive in English. You can say Lucas’ car or Lucas’s car. There is no hard rule here, so both are accepted. Some people will prefer using only the apostrophe and some would rather keep the apostrophe s. It is up to you!

Possessive rule #5 – For inanimate possessors, use of

When you have inanimate owners, such as book, plane, and project, use of to define the possession. Here are some examples of this possessive structure in English:

We also use of when referring to the part of a whole when talking about inanimate possessors. For instance:

However, we have two options in situations where the part is more important than the whole:

Explanation: in this case, the part is the rooftop and the whole is the building. Since the pool is located on the rooftop, which makes it more important than the building in this particular sentence, both options are acceptable.

Explanation: the roof is more important than the house, which is the whole, in this sentence. Therefore, both options are acceptable.

Possessive rule #6 – For complement noun groups, of is essential

Let’s keep talking about the possessive structure in English. Sometimes, you have to use of and an apostrophe does not work. Any time you describe a thought, idea, reason, criticism, belief and need, you should use of + noun. This is a complement noun group.

Further, you’ll find that some names include of.

Complemental noun groups can often be rephrased as compound words, but you do not add the ‘s.

We don’t use ‘s to make nouns plural. This is a common error, especially with nouns made of letters. All you do is add s to the end of the noun.

Also, be careful with it’s and its. It’s is a contraction that means “it is”. Its is a possessive adjective. Here is one example:

The word its refers to the car and has no apostrophe. If you’re unsure about the common words with contractions, you can learn more here with our punctuation guide. You can listen to a teacher explaining this difference here.

We know there are a couple of rules for you to get familiar with. Even though the possessive structure in English can seem overwhelming at first, we guarantee you that it will get better! Happy studying!