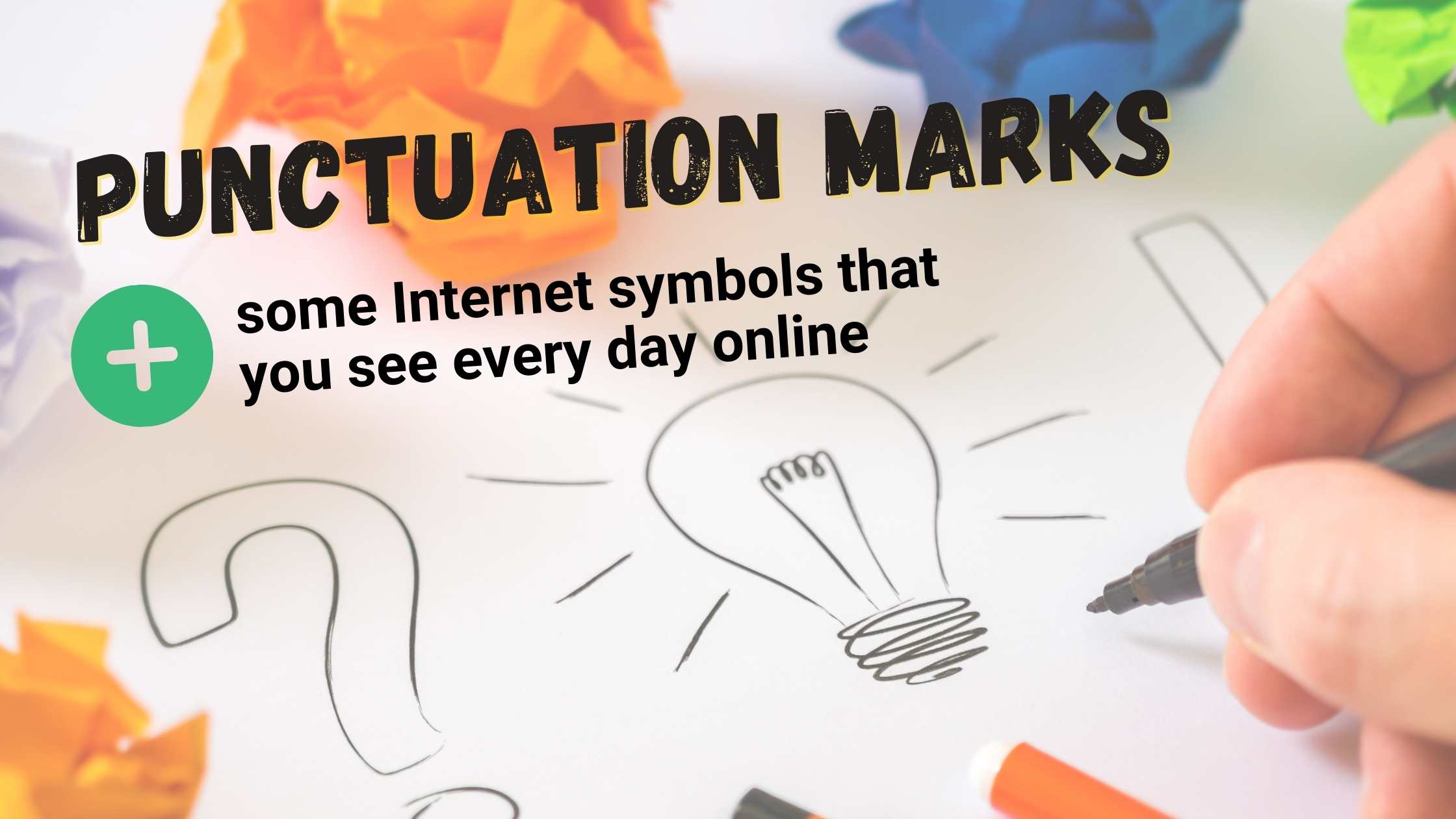 14 punctuation marks: how to use each one of them

Have you ever asked yourself, “What is punctuation?” Well, punctuation is a group of symbols used to communicate to a reader how to interpret a written text. People have been speaking languages for thousands of years, and as the written language was invented, punctuation became very important for helping writers express thoughts in the same way that speakers do. You probably already know a lot about this topic from your first language, but it’s important to know that punctuation in English may operate a little differently.

In this section we will go over the 14 common punctuation marks you will use when writing in English and present you with the rules you should follow to use them correctly and then convey the right message. Plus, we have tons of example sentences with punctuation marks so you can see them in action.

Let’s start with the period (.), also known as a full stop in British English. The period is placed at the end of a sentence that is considered complete. It is also used after abbreviations. Take a look at some examples below:

The comma (,) is one of the most difficult punctuation marks for students to use correctly. We use a comma to separate elements in a sentence. For instance, we use the comma to separate all the items a person got at the supermarket: “She bought two carrots, one pineapple, and six bananas.”

We also use a comma to separate two complete sentences that are separated by any of these conjunctions: and, but, yet, for, or, nor, and so. Therefore, we will use a comma in a sentence like this one: “They bought the house, but they still need to buy a new car.”

Commas are also used to set off nonessential elements in a sentence. Some examples of this situation are:

Like I said before, commas sometimes make students confused. One of the most common mistakes is placing this punctuation mark between the subject and the rest of the sentence. Take a look at the examples below:

The colon is used after a word that introduces a quotation, an example, or an explanation. A good example is “Kelly has three hobbies: cooking, knitting, and drawing.” We can also use the colon to emphasize something. For example: “There is one thing Kim loves more than money: her kids.” Another situation in which we use a colon is when we express time. We often put this punctuation mark between the hour and the minute like 11:15 a.m. or 10:20 p.m.

We use a semicolon (;) to connect independent clauses that somehow are still connected. If there wasn’t any connection there we would simply use a period. Here are some examples of sentences in which we would use a semicolon:

Remember to use a comma if your sentence has a conjunction like: and, but, yet, for, or, nor, and so. Do not use a semicolon to separate clauses connected with a conjunction.

Both the question mark and the exclamation point are symbols that we place at the end of sentences. Question marks are used to indicate questions, so the WH question words are often present in sentences with this punctuation mark.

The exclamation point is used to express happiness, excitement, surprise, or to add emphasis. Here are a few examples:

The apostrophe is a very common punctuation mark in the English language, but it is not common in all languages. In Portuguese, for instance, we hardly ever use it. Maybe that explains why some students make mistakes when using it in English.

The fact is that we use an apostrophe in three situations. We use this punctuation mark to:

Here is a list of common words that use an apostrophe in English because they are contractions of one or more words.

Many people make a common mistake with the apostrophe, so beware! Do not use this punctuation mark with plural nouns.

These two punctuation marks are pretty similar, so it’s easy to confuse them. The hyphen is a short line and it is used to join two or more words to make a compound term, such as back-to-back and part-time. The dash, on the other hand, can be divided into two: the endash (–) and the emdash (—). The first, which is shorter, is used to indicate a range, such as “the 1800–1900 period”. The emdash is often used to improve readability or to emphasize something. Its use is similar to the comma, the parenthesis, and the colon. For example: “This recipe is the best — and believe me, I have tried many different recipes!”

We use brackets to insert information that can clarify something in the sentence. For instance, “He [Paul] will send the documents tomorrow.” Braces are punctuation marks that are not used that much in writing, but you see them often in computer programming or to indicate mathematical expressions. Parentheses are used to add extra information. They can usually be replaced by commas, though.

Quotation marks are used in pairs. The first mark (“) looks different from the second one (”). We use it when saying something that another person has written  — which we call a “quote”. Single quotation marks (‘) are punctuation marks used when we need to quote something within a quote.

Has someone ever asked you for your email in English and you realized at that very moment that you had no idea of how to say “@”, “_”, and “.”? Well, we are here to help you learn how to say these symbols in English!

I would say: My email is bruna-at-site-dot-com

So here is a simple glossary for you to talk about the internet symbols and their English pronunciation:

Exercises to practice punctuation in English

Ready to try using punctuation? Take this quiz to check your knowledge!

We hope this guide to punctuation marks in English helps you write better. Make sure that you are dedicating time to all English skills: listening, speaking, reading, and writing. The reason why I say that is because many students focus too much on speaking, for instance, and totally forget about writing. Whenever you do that, punctuation gets more difficult. By reading in English, you will also learn a lot about punctuation marks. Happy studying!