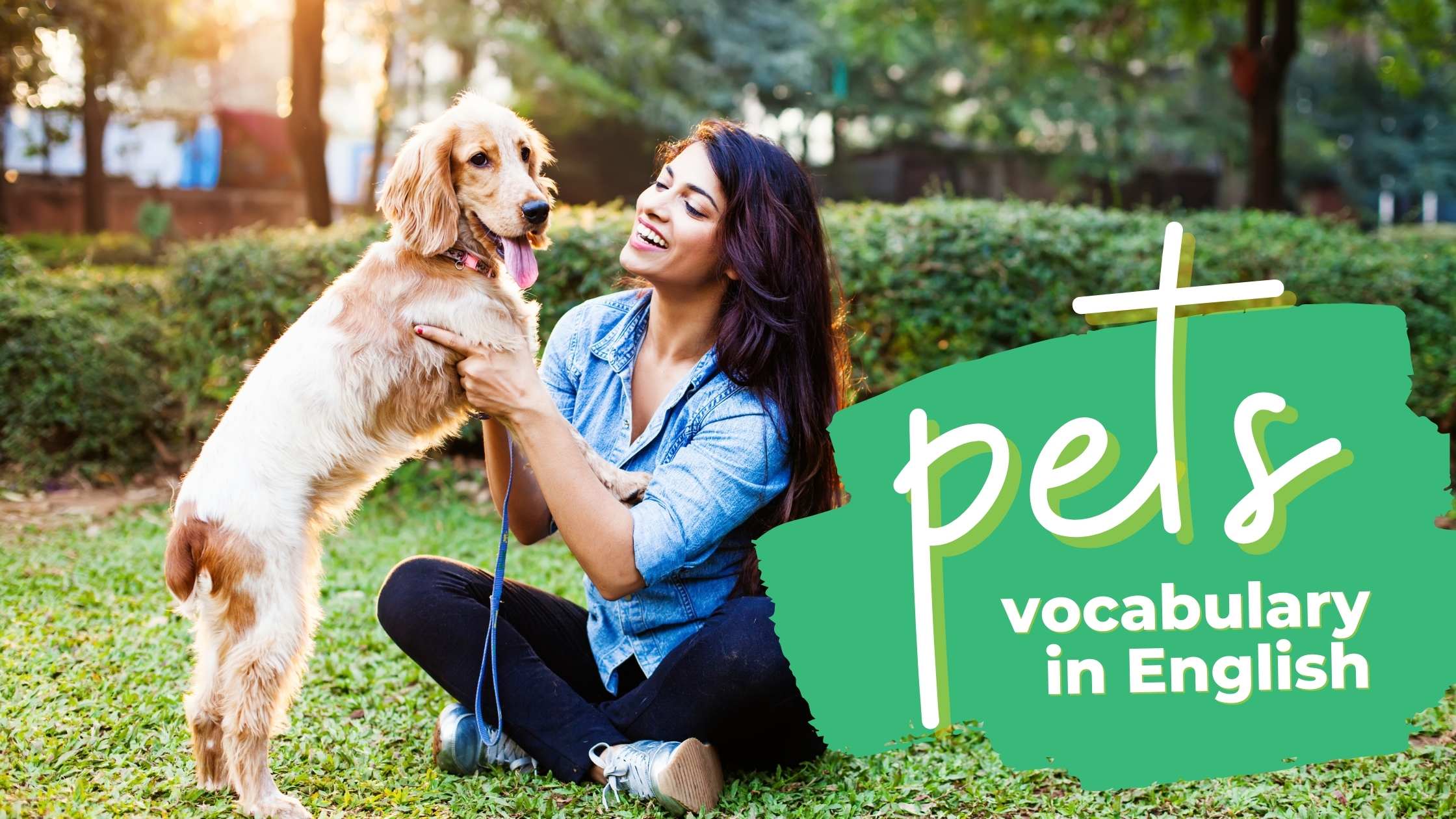 More than half of all Americans have cats and dogs in their homes. To give you an idea of how pets are important in the world today, 9 in 10 Americans consider their pet to be a part of their family. Taking those stats into consideration, it is very likely that you, as an English student, also have a pet or interest in animals, which means you will eventually need to talk about them. That’s why today we will go over pet vocabulary in English.

Everything you need to know about pups

Dogs are the most common pet in the world. There are almost 70 million dogs in the USA alone. Brazil comes second, with more than 35 million of these friendly animals, and China has a little over 30 million canines. Dogs are usually referred to as the man’s best friend and that’s because they are loyal, affectionate, and devoted. It’s important that you can talk about your dog’s own personality using the right words. Here is a dog vocabulary list to help you describe your pet:

Now, let’s go over some more dog vocabulary in English. We use the word puppy to refer to a baby dog. For smaller breeds, dogs will be puppies for around 9 months. On the other hand, a large dog breed will mature into an adult at about 15 months.

Now, do you know that there are 360 recognized breeds around the world? Want to know more? You can browse a list of dog breeds if you have some time.  Of course, not all dog breeds are common or even popular. The Labrador Retriever (think Marley, from the book/movie Marley and Me) is the choice of many families for their friendly temperament. Another popular breed is the German Shepherd, which is a hard-working dog. The Golden Retriever is also a popular pick –– besides being an intelligent and good work dog, this breed is often used as a guide dog. Smaller dogs, such as the Beagle, the Yorkshire Terrier, the Dachshunds, and the Poodle also make the list of the most popular dog breeds in North America.

When talking about breeds, you may also hear the words mixed-breed and purebred. A mixed-breed dog is the dog that doesn’t belong to one officially breed. We can also call them a mongrel or a mutt. You can adopt mixed-breed dogs at your local Animal Shelter, for instance. On the other hand, a purebred is a dog which has a documented pedigree and may be registered with a breed club.

How to talk about your dog’s behavior

There are some words that you should know in order to talk about your dog’s behavior. For instance, how do you call the sound that your dogs usually make? The word is bark. You can say, for instance: My dog barks when I leave the house.

Still talking about the sounds a dog makes, we can say that it is baying or howling. The bay is longer than a bark but shorter than a howl. A howl is a long loud sound. A dog can also whine, which is a sound they make when they want something.

Most dogs love to play fetch. Playing fetch means that you throw something and the dog will bring it back or retrieve it.  Keep reading for more pet vocabulary in English!

Dogs need to be taken care of. That means you can’t just adopt them, bring them to your house, and hope they will take care of themselves (that’s basically what cats do, but we will talk about cats in the next section of this post). Therefore, you need to take them to a pet shop regularly for them to take a bath and be groomed. They also need to go to the veterinarian (or vet) to be vaccinated from time to time. Some people even have pet health insurance for their dogs.

In order to be healthy, most dogs need to take walks. Depending on the breed, they may need to go out 3 or 4 times a day. Some dogs also love to interact with other dogs, so it is common in some places to take them to a dog park, for instance. It is also common for dog owners to take their dogs for a hike or for a swim in the lake. In general, dogs love to be near their owners and they need to be active in order to be happy. Some dogs also love to be petted.

When getting a dog for the first time, you will probably need to get some items for them. Some of those items are a food bowl and a water bowl, a cage, a collar, an ID tag, and a leash.

When it comes to feeding them, some dogs will eat dog food and some will have home-cooked meals, such as lean chicken, fish, brown rice, and boiled pasta. When training them, you can offer treats as rewards.

There are over 74 million cats in the United States. China comes second with a cat population of 53 million. Russia and Brazil are the next on the list, with 17 million and 12 million cats, respectively.

Cats are independent, playful, and extremely intelligent. They also love to sleep –– a cat usually sleeps for about 12 to 16 hours a day.

Some people don’t like cats because they have this idea that cats are not as affectionate as dogs. I have had cats since I was 15 years old and I can tell you that they are nothing like it. Cats can really feel when you are sad, for instance, and they will immediately sit by your side or even right on your lap. They also tend to follow you around the house (especially to the bathroom) and greet you every time you come home. They may not be as loud as a dog and they probably won’t play fetch, but I can guarantee you they make the best companions. Let’s take a look at some cat vocabulary, shall we?

Now, let’s learn more pet vocabulary in English. A baby cat is called a kitten. Indoor cats have an average lifespan of 13 to 17 years. On the other hand, a cat that lives on the streets will most likely live only 5 years. We use the word lifespan to talk about how long a pet can live, but we use the word ‘life expectancy’ to talk about humans.

Just like dogs, there are different cat breeds in the world. The most common are the Persian (think Garfield), the Siamese, the Bengal, and the Sphynx. The last one is known for its lack of fur and for being social and active, really dog-like. Remember that we talked about mixed- breed dogs, which are those that don’t belong to a particular breed? That also happens with cats. Mixed-breed cats are also referred to as ‘domestic cat’.

Dogs bark. Cats meow. The curious fact about this sound is that cats only use it to communicate with humans. The meow usually means that the cat wants something, whether it’s attention, food, or for you to open a door for them. It can also signify loneliness or even illness. My favorite sound is the purr. The purr is made when the cat is in a good mood. When you start petting them and they start to nest near you it is almost sure that you will hear them purring.

Remember when I said cats are independent animals? Well, they are so independent that you do not need them to take them for a bath at the pet shop. They spend hours and hours cleaning themselves by using their tongue. If there is more than one cat in the house, they will often lick each other in order to get cleaned. They also do not go out for walks and they urinate/defecate in a litter box. It is important to know that cats like to have some privacy when going to “the bathroom”, so you should keep their litter box in a space that doesn’t have a lot of traffic.

The pet list does not stop at cats and dogs! While it is true that most people have these pets, but there are other options for you to choose from. Fish, birds, rabbits, hamsters, parrots, horses, guinea pigs are just some of the animals that live in houses with humans.

So, do you have a pet? We would love for you to tell us their name and describe them for us in the comment section! I’ll start, ok? Try to use all the pet vocabulary in English you learned from this blog post.

I have two cats. Their names are Alice and Gypsy. Alice is 5 years old and Gypsy is almost 16 –– yeah, he is an old gentleman. Alice is such an active cat. She loves to sunbathe on the balcony and she hates when I start typing on my laptop, so she usually comes and sits on top of my keyboard in order to make me stop working and start petting her. Gypsy has been in my family for almost 16 years, he is the first cat we ever adopted. He sleeps a lot! When I’m sad, he immediately comes to my lap and starts purring. I love them to death!

There are so many movies and books about pets that I don’t even know where to start. Well, I will share with you two movies and one book that you should check out if you like pets.

Plot: The true-life story of Megan Leavey, a young Marine corporal whose unique discipline and bond with a military combat dog saved many lives during her deployment in Iraq. Assigned to clean up the K-9 unit after a disciplinary hearing, Leavey starts to identify with Rex, a particularly aggressive dog that she trains. Over the course of their service, Megan and Rex complete more than 100 missions until an improvised explosive device injures both, putting their fates in jeopardy.

Plot: A college professor (Richard Gere) forms a lasting bond with a dog that he finds on a train platform. You can learn lots of pet vocabulary in English by watching this movie.

Book: Dewey, The Small-Town Library Cat Who Touched the World, by Vicki Myron (2008)

Summary: This is the heartwarming, true story of an abandoned kitten who went on to live an extraordinary life, inspiring a struggling single mother, transforming a sleepy library and the inhabitants of its depressed Iowa farm town, and ultimately capturing the hearts of animal lovers around the world.

So, what do you choose? Cats or dogs? Or fish, or rabbits or horses or birds? Learn how to express preferences using either, neither, and both. The fact is: there are animals and pets for every type of person. Let us know about your pets in the comment section! We truly hope this blog post about pet vocabulary in English is helpful to you!