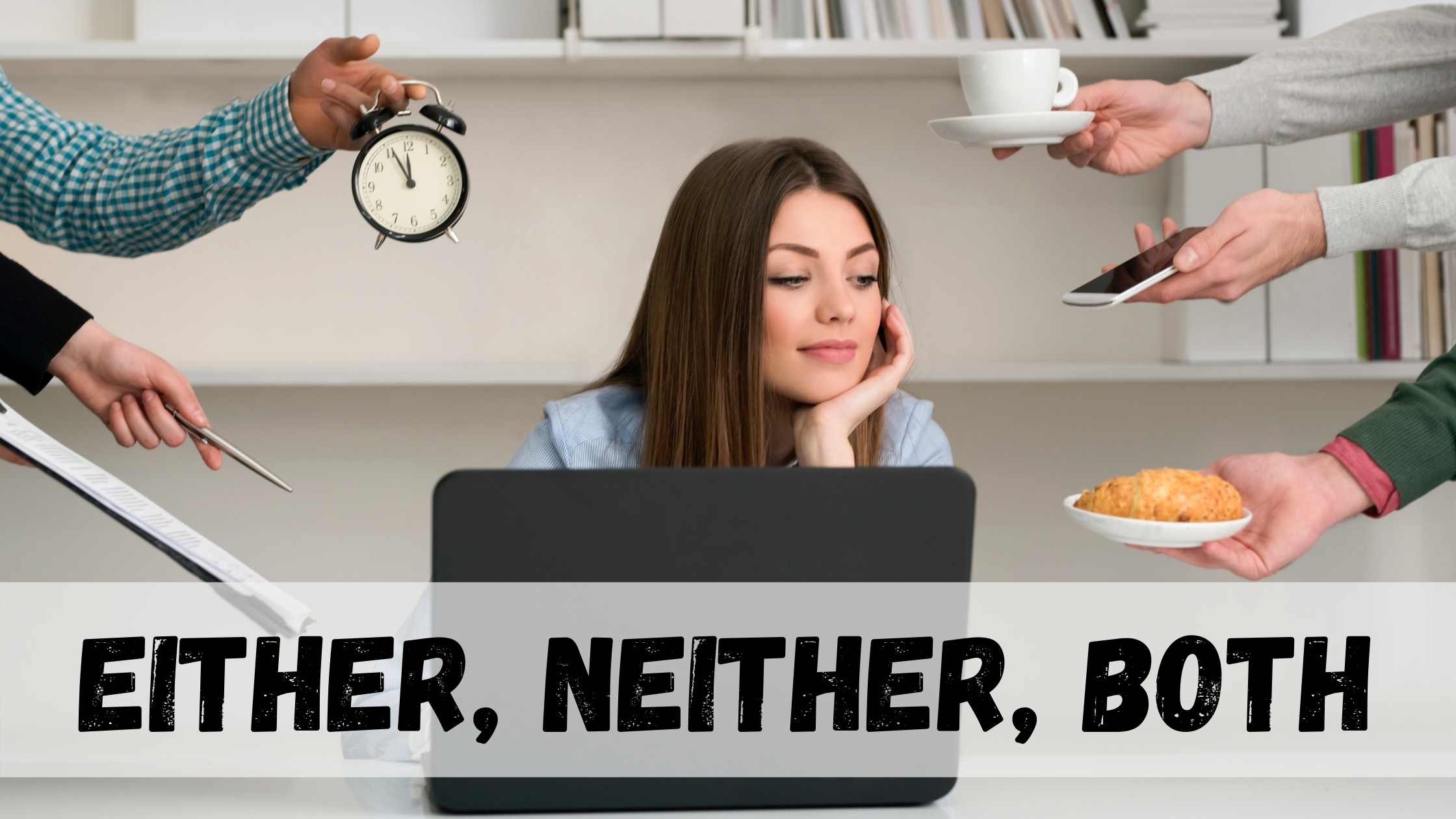 Being able to express your preference when presented with options is important for anyone who is learning a new language. In English, we use three words to do that: neither, either, both. In this blog post, we will go over each one of them, explain the difference between neither or either in English, and help you understand how to use these terms. Let’s get started!

Pronouncing neither or either in English

Before we get started, let’s take one thing out of the way: the either neither pronunciation difference. Many students question what is the right way to pronounce neither or either in English. Maybe you’ve heard these words being pronounced before and noticed that some people say “eether” and some say “aither”. The same happens to neither: you will hear both “neether” and “naiether”. Now, what’s the right one? The answer is: both!

Yes, you can pronounce these words both ways in English. It’s important to say that this is not a difference between American English and British English. People who were born in the same city can pronounce it differently. So, you can decide which pronunciation you like better. For me, it’s more natural to say “eether” and “neether”, but that doesn’t mean I will never say it the other way. It’s up to you, my friend!

Rules for both in English: referring to two things

Imagine that a friend calls you and asks you if you want to have dinner at your favorite restaurant or go to the movies to watch that film you are dying to see. Seems like a complicated choice, right? So you go ahead and say: Can we do both?

Both in this sentence means that you like the two options that were given and you would like to do both activities instead of choosing just one.

You can also use both to refer to two things that were already mentioned in the dialogue. For instance, your roommate asks you “Are your mom and dad coming to the party tomorrow night?” Here are some possible answers you can give to indicate that they are going to the party:

Notice that you have four options. The first is just repeating the words “mom and dad.” You could substitute that word for the plural form, which is “parents” in this case. Better yet, you can use both, which refers to your mom and your dad in this case. Besides that, you can also choose to say “they are both coming” or “both of them are coming”. They both mean the same thing.

The rule for using both is:

Here are a few more examples of both in English:

Either: when both options are good

Now let’s take a look at neither and either rules in English. Sometimes all options that are offered to us look good. In this case, we would use either… or to say that we don’t really have a preference, since both options are ok. For instance:

Either usually has a positive connotation, since one of the options offered will eventually be chosen. However, we can also use either to agree with a negative statement. When we do that, the sentence must be negative as well. Here are some examples:

Neither in English: when none of the options is good

Now you know more about either grammar in English. And what about neither? Keep reading to know when to use neither or either. Neither means not + either. We will use neither to disagree with both options given to us. For instance, let’s imagine that you are vegetarian. If someone asks you “Do you prefer chicken or fish?”, you will say “Neither. I’m vegetarian.”

Another common use of this word is with the word nor. In this form, these words actually create a conjunction in English. Neither…nor means that two options are not good for us. Check out the meaning of neither with this example:

We also use neither to agree with a negative sentence. In this case, the sentence must not contain a negative word. Let’s look at the examples we work with above when giving examples with either:

We have two options. The first one, “me neither”, is informal. It can’t be used with any other subject besides “me”, though. The other option needs to follow this structure:

The most common use of neither in English is actually to agree with someone in a negative context. The structure is a little bit different though, so look at some examples.

Let’s practice using neither, either, both with this exercise below. Good luck!

We hope this blog post helps you understand when to use neither or either in English, as well as the rules for both. Even native speakers get confused sometimes, so don’t worry! Happy studying!