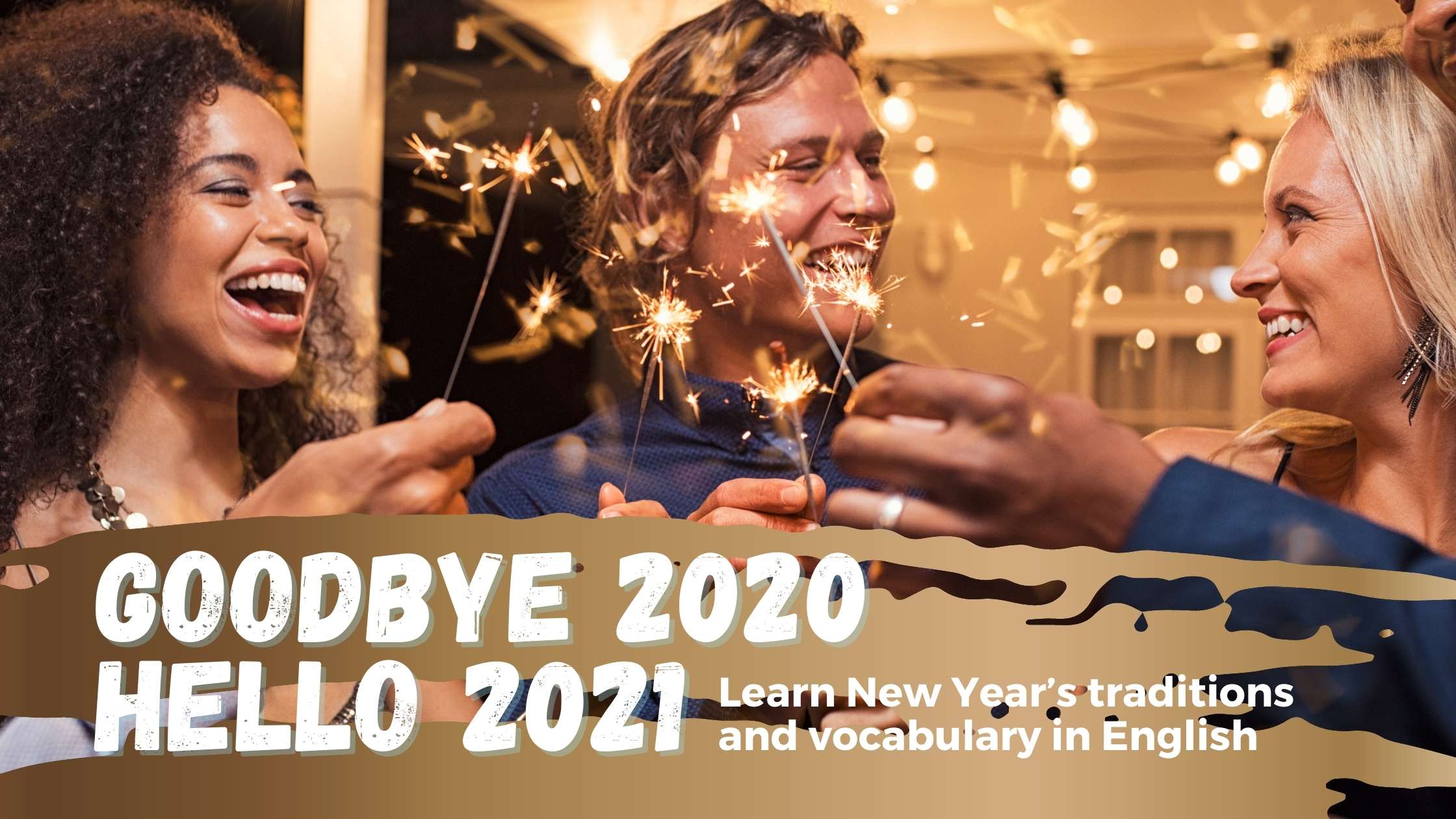 It’s that time of the year that we start thinking about all the things we have done and start planning our goals for the year that is about to start. For some people, this holiday (New Year’s Eve and New Year’s Day) is time to go to the beach and watch the fireworks while others prefer to have a gathering at home because it is too cold out. Some people also have New Year’s Eve traditions to celebrate this global holiday. In this blog post, we will explore some New Year’s vocabulary to understand different practices around the world and learn some words in English to help you celebrate another turn around the sun.

One of the most common traditions on New Year’s Eve is to countdown when it is 11:59 p.m. No matter where you are, people will start counting down from 10 to 1 until it’s midnight and they can yell “Happy New Year!” and hug one another.

Once the countdown is done, fireworks start. Many cities across the planet host a fireworks display. In Rio de Janeiro and Sydney, for instance, fireworks usually last from 15 to 30 minutes. In New York, the tradition is a little different. People go to Times Square and wait for the ball drop. This giant ball is placed on top of the Times Tower and it drops right after the countdown. Despite the freezing temperatures, a lot of people gather around Times Square to watch it. You can also watch the ball drop online.

It is also common to pop a bottle of champagne and have a toast with friends and family. Some people may say something like “I would like to make a toast to the New Year” or “Let’s toast, guys!”. How many words about New Year’s vocabulary did you know before reading this blog post?

This is what you should do on New Year’s Eve: superstitions and traditions

Now, let’s go back to New Year’s Eve. Some people believe that one should do a few things on that day in order to have a prosperous year. Let’s take a look at some superstitions for New Year’s Eve.

Now, let’s talk about New Year’s vocabulary related to food. For those who live in the South of the United States, eating black-eyed peas and collard greens means you will have money and prosperity in the new year.

In Spain and some Latin American countries, the tradition is to eat 12 grapes at midnight. The idea is to eat one grape for each month of the year. If you do that, you will have a lucky year ahead of you. Some people also believe that entering the New Year without having food in the house is not a good sign. So, it is important to go grocery shopping before midnight and make sure your pantry is filled with food.

Is there any special food you eat on New Year’s Eve? For me, lentils and grapes are a must-have! My mother also doesn’t let us eat chicken, since they are known for scratching backward for food, which is not a good sign.

Another common New Year’s tradition is kissing a loved one at midnight. In Brazil, there is this very common tradition to head towards the beach at midnight to jump seven waves. Since it’s summer here, everyone goes to the beach and celebrates there. Jumping the waves is a very common tradition. While you are jumping them, you should make a wish. You are granted one wish per wave. Brazilians are also famous for wearing white on New Year’s Eve. Yes, everybody wears white! The good thing is that you don’t really need to think about your outfit. White also means peace, which is always a good thing to ask for, right?

In Denmark, a popular tradition is breaking dishes in front of your friends and family’s houses. The more broken dishes you have on your doorstep the next morning, the luckier you will be in the New Year!

Love learning about holidays? Make sure to read our blogs about Christmas celebrations or Halloween traditions.

Well, no matter how you choose to ring in 2021, we hope this new year is better for all of us! We also hope your new year’s resolutions come true and that you have an amazing year. Now you know more about New Year’s vocabulary. Have fun and….Happy New Year!