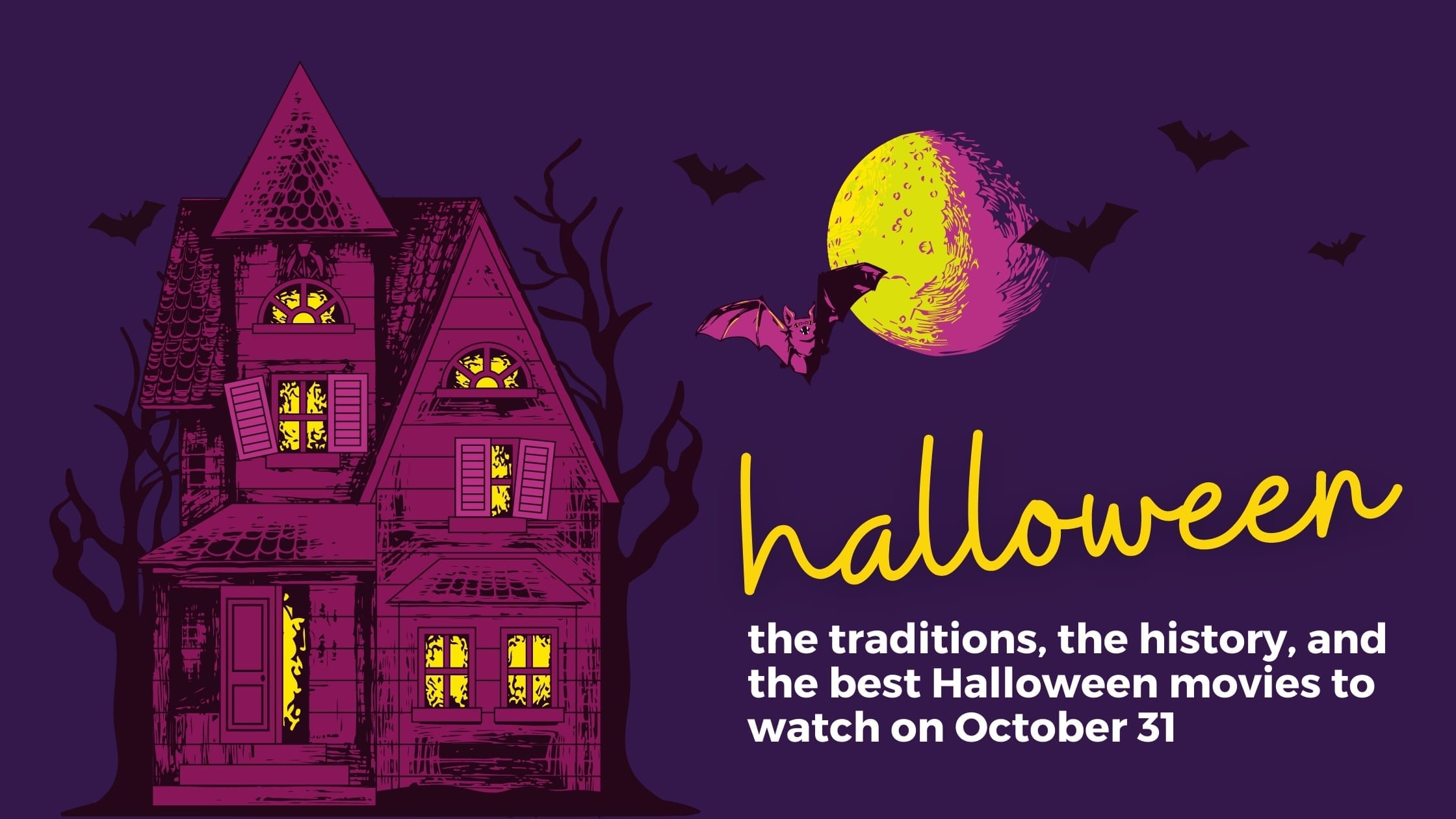 Did you know Halloween is the second most popular holiday in the USA? And like any other holiday, there are certain traditions people must follow. Even if you do not celebrate Halloween in your country, this is a great lesson for you to learn more about this important part of American culture. We will go over the history behind Halloween, teach you Halloween words, and give you some spooky movie recommendations. Keep reading for Halloween vocabulary in English and much more!

The origins of Halloween

Many people who celebrate Halloween have never questioned the history behind the holiday. Nowadays we dress up, buy candies, and go to parties, but there are explanations for all these traditions. Let’s learn a little history, shall we?

On November 1st, Catholics all around the world celebrate All Saints’ Day, which is also known as All Hallow’s Day. The holiday honors Saints who have passed on to the afterlife.

The tradition of having celebrations on October 31st goes back 2,000 years. Back then, a tribe of people called the Celts lived in modern-day Ireland, United Kingdom, and southern France. They commemorated the end of summer with a festival called Samhain. People would light bonfires and dress up like ghosts so that evil spirits would not bother them. They also left food on their front doors so that ghosts would not play tricks on them. In order to keep the ghosts away, the Celts also carried lanterns made out of turnips. Nowadays, people all around the world, but especially in the United States, wear costumes, go trick-or-treating, and carve pumpkins on Halloween. These similarities are not purely coincidental!

Celebrating Halloween in the USA

Now that you know Halloween didn’t originate in the United States you may be wondering why the holiday is so popular there.

In the second half of the 19th century, a lot of immigrants went to the USA. Among them, there were people from Ireland and England. They used to celebrate the Celtic festival called Samhain, so they brought the holiday with them to America. Things changed, though. Halloween became a party instead of a night devoted to scaring evil spirits away. Americans also added some extra elements, such as candy (a lot of candy!) and bizarre and funny costumes.

Similar Halloween traditions around the world

Even though nobody does Halloween like Americans do, there are similar traditions all around the world. In Mexico, part of Latin America, and Spain, people celebrate the Día de Los Muertos (Day of the Dead) from November 1st to November 2nd.

In Ireland, which is considered the birthplace of Halloween, they celebrated it with traditional food, games, and bonfires.

The Japanese celebrate Halloween at the end of October with a big parade in the city of Kawasaki. Fun fact: it is necessary to apply for a spot if you want to join the festival. You can watch it for free, though.

Are there any Halloween-like traditions in your country? We would love to hear more about it. Feel free to leave a comment down below!

Before we dive into the 4 vocabulary sections we have created (adjectives, objects, candy, and creatures), we must go over two important concepts of Halloween traditions in English: trick-or-treating and costumes.

You have probably seen a Hollywood movie where kids go trick-or-treating. Maybe you didn’t know exactly the name of this activity – until now. Often referred to as both “trick-or-treat” and “trick-or-treating”, the idea of this tradition is to dress up in costumes and go knocking on doors around your neighborhood asking for candy. ‘Trick-or-treat’ means that if someone doesn’t give you a treat (candy), you will play a trick (a joke) on them.

There has been a debate on whether trick-or-treating during the Coronavirus pandemic would be safe or not. Most authorities think it is not safe, since kids would go door to door asking for candy, which means touching different surfaces and talking to many people. However, trick-or-treating has been considered dangerous for a long time. There have been reports of children finding razor blades among their Halloween candy. Some kids have also gotten tainted candy that can be dangerous. In general, though, if you go trick-or-treating in your neighborhood you should be safe. Most likely, the worst thing that could happen is eating too much sugar!

A costume is a set of clothes people wear with the goal of looking like someone else, usually with the purpose of entertainment. We also use the phrasal verb ‘to dress up’ to say we are wearing a costume.

Here are some examples of how to use the vocabulary term.

People can wear costumes on several different occasions, like throwback parties, which are parties themed to decades, like the 60’s, the 70’s, etc. However, there’s nothing like Halloween. Dressing up is one of the best parts of the holiday.

I was born and raised in Brazil and we don’t celebrate Halloween here. The only Halloween parties around are the ones private language schools host. Growing up, I always had the misconception that Halloween costumes need to be scary. For me, people needed to dress up as witches, vampires, and skeletons. That’s not true. I later found out that costumes are often based on pop culture and they change every year.

The last Halloween party I went to was in 2016. I dressed up as “Eleven”, from the TV show Stranger Things. The show was very popular at that time and a lot of people had the same idea. This year you may find people dressing up as the character “Forky”, from the movie Toy Story 4, or as anything that has been a trending topic this year. However, some costumes are classic and will always be popular. Ghosts, superheroes, princesses, and cats are among the ones you will find every year.

Some people like to wear homemade costumes; others prefer to buy a costume online. It is really up to you! So, who will you be this Halloween? Are you designing your own costume?

Even though Halloween is not a scary holiday anymore, you will hear many stories about ghosts, supernatural events, or mysteries. When hearing those stories, some adjectives may come up. Let’s take a look at the most common ones with this Halloween adjectives list.

People love to decorate their houses for Halloween. Check the images below to learn more about the most common Halloween objects.

It wouldn’t be Halloween without candy

What if I told you that one quarter of all the candy that is sold annually in the United States is purchased for Halloween?

Yeah, that’s true. I am not kidding.

In English, the word ‘candy’ is used to refer to confections that have sugar as the main ingredient. Therefore, we may refer to chocolate, chewing candy, and sugar candy as ‘candy’. In British English, you will hear the word ‘sweets’ and Australians may refer to them as ‘lollies’.

The most popular Halloween candies in the USA are the ones below. Do you have them in your country? Which ones are your favorites?

Don’t get scared on us now, because we’ve reached the part about Halloween creature vocabulary! A creature is often a fictional or imaginary being, like a monster or animal that usually scary. Halloween is all about scary creatures. You will see them used as decorations, some people will dress up like them (actually, these monsters are among the most popular Halloween costumes ever), and others will tell spooky stories about them.

Play this game to learn some of the vocabulary terms for Halloween creatures in English.

In this memory card game, match the picture with to the card. Turn your sound on if you want to hear the pronunciation of the words!

There are many movies people associate with Halloween. Some of them are not about the holiday itself, but are scary, mysterious, or talk about strange creatures. I thought about movies that remind me of Halloween in the United States and I selected four classic ones that will make you feel like you are celebrating Halloween in an American city. Have fun!

This is the first movie of the Halloween franchise, that consists of 11 films. The movie tells the story of Michael Myers, a man who escapes a psychiatric hospital and starts stalking and killing babysitters on Halloween night. The actress Jamie Lee Curtis plays Laurie, a high school student who is attacked by Myers. In 2018, after several sequels, Jamie Lee Curtis played Laurie again in a movie also called Halloween. In that one, she faces Myers again, 40 years after he tried to kill her for the first time.

This is a children’s movie about a young boy who travels with his grandmother and finds out about a witch convention that is happening in the hotel he is staying at. The remake of this movie was launched this year, on October 22nd. Make sure to watch the original one before, though. It’s so worth it!

The movie is set in Salem, Massachusetts, and it tells the story of three witches who are resurrected by a teenager on Halloween night. Salem is known for witch trials that happened there in 1692. This is my favorite Halloween movie!

I am a big fan of the Olsen Twins, so I could not leave this one out. This is also a children’s movie. It follows sisters Kelly and Lynn as they try to save their great aunt Sophia, who was cursed and trapped by her evil sister.

Now the big question is, how will you practice your new Halloween words?

We hope you have a super spooky and fun Halloween this year. Now that you know a lot about Halloween vocabulary in English, maybe you can even throw a Halloween party for your friends. What about dressing up, buying candy, trick-or-treating, and watching Halloween movies? Sounds pretty fun to me! Enjoy!