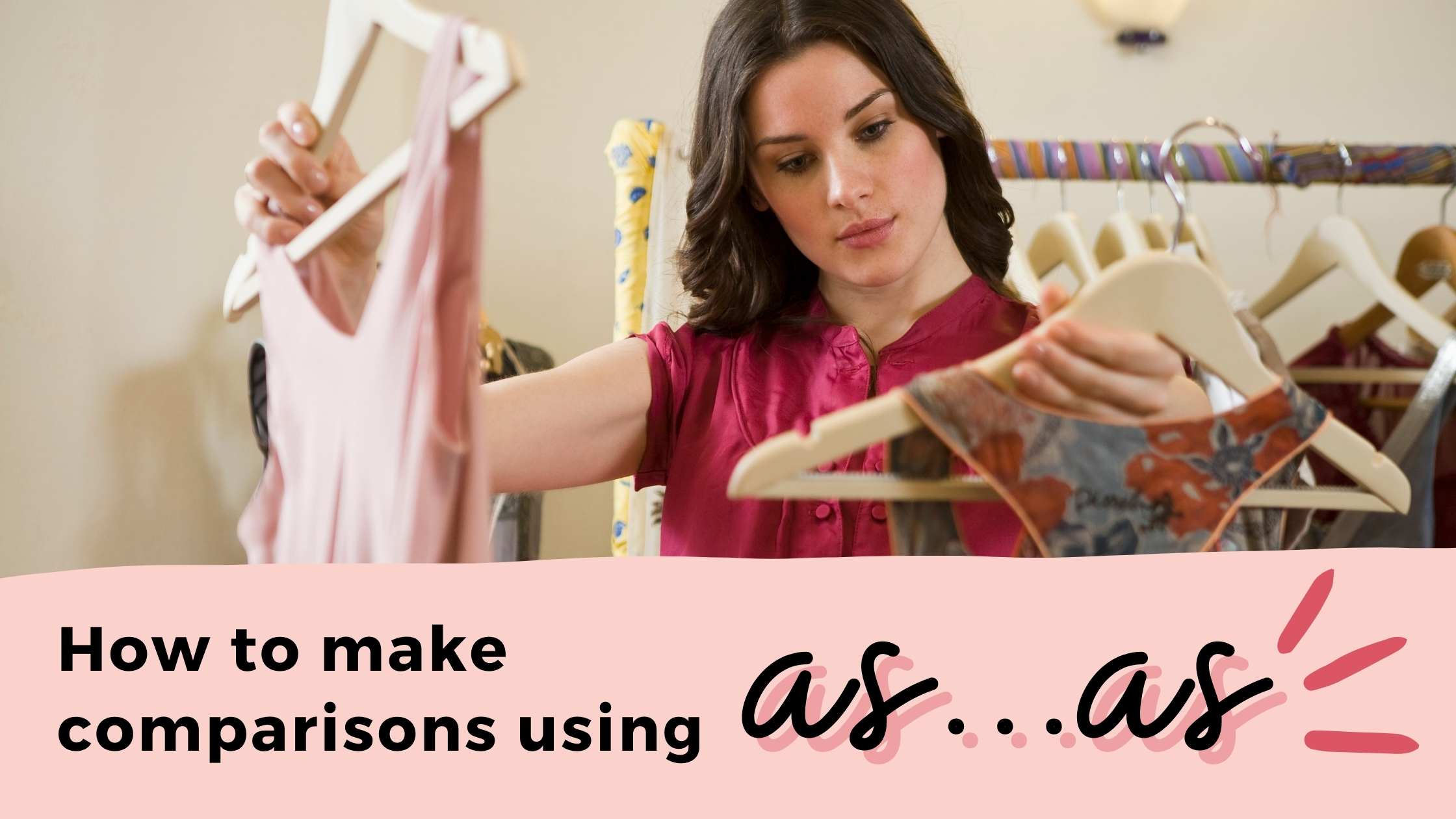 Adjectives have different forms in English. We use comparative adjectives to compare two things or objects and we often use the word ‘than’. Superlative adjectives are used when we compare something or someone to everything else. But what if we feel the same about two things or people? In this case, we will use as…as to show that two things are the same. If we want to say that two things are not the same, we will use not as…as. Keep reading to understand the rules for making comparisons in English with as…as, practice making the comparative with some exercises, and learn the difference between like and as.

The sentence structure of as… as

Let’s picture this: you are at the mall to buy an outfit for your best friend’s wedding. You look around the store and end up bringing three options to the dressing room. The first option is a plain yellow dress. The second one is a floral pink dress. The third option is a light green dress. You try them on and call your mom to ask for an opinion.

— Well, I’m a little confused. I have tried three different dresses, but I don’t know which one I should buy.

— There’s a yellow one, a floral one, and a light green one. The yellow dress is longer than the floral one. I like it!

— Yeah, that’s true. The floral one is not as beautiful as the yellow one, but it is the cheapest. I might buy it because I don’t want to spend a lot of money.

— Oh, Valerie. Don’t worry about money. Your dad and I will pay for your dress.

— Yeah, sure. And what about the light green one? How do you like it?

— I love it. It is as beautiful as the yellow one. It is a little shorter, but I think it is the most flattering one.

— Got it. Well, send me a picture of the yellow one and the light green one then.

Let’s take a look at some more sentence structure examples:

We have talked a lot about how to compare people and things, but how do you compare actions?

You can use either as or like to compare actions.

We also use ‘like’ to compare sensory experiences, using verbs such as ‘to smell’, ‘to taste’, ‘to look’, ‘to sound’, and ‘to hear’. Watch the video below for examples.

As … as: functioning as an adverb, the ‘as’ is describing the adverb (of the verb)

Amanda drives as carefully as her brother (does).

Explanation: in this sentence, we use ‘as’ to compare the way Amanda drives to the way her brother drives. This means we are comparing their actions. The adverb here is ‘carefully’.

Meredith works as quickly as her boss (does).

Explanation: in this sentence, we use ‘as’ to compare the way Meredith works to the way her boss works. We are comparing their actions. The adverb here is ‘quickly’.

Using as to describe a position

We also use ‘as’ to describe a position. Here are some examples:

The best way to practice new grammar rules is by doing exercises. We hope these making comparisons exercises help you. Good luck!

Now that you have all the info you need about making comparisons in English and that you have done some as…as grammar exercises, we hope it will be easier for you to use as…as. We also hope the difference between like and as is clear now. If you have any questions, feel free to leave a comment down below. Happy studying!