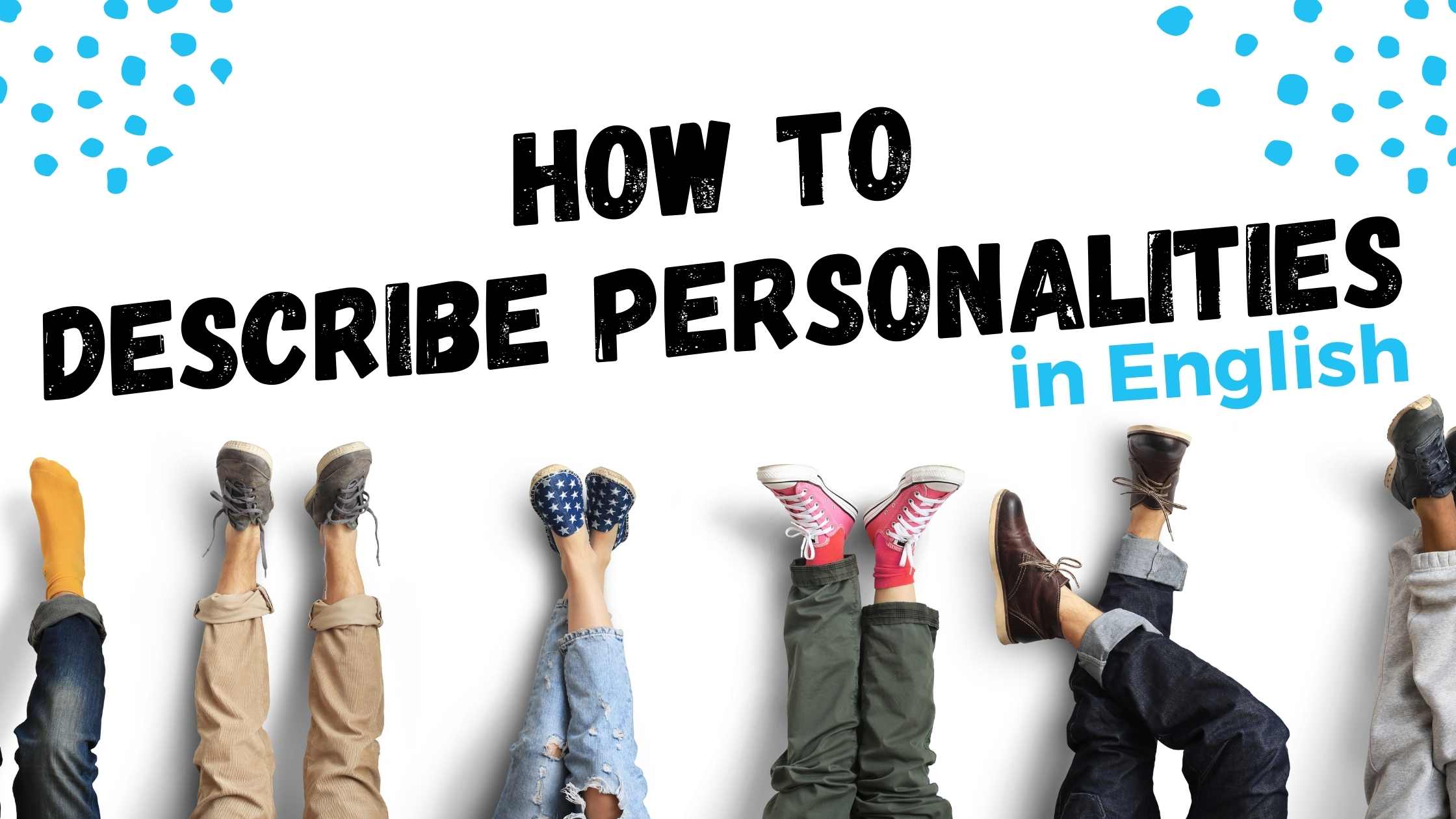 Talking about your personality is essential for many different reasons. You may need to introduce yourself to a group of people, talk about it with a college advisor, or convince someone from HR that you are the best fit for a job position. In order to describe personalities in English, you need to learn some adjectives. In this blog post, we will go over a list of 22 adjectives that can be helpful to you whenever you need to talk about your personality. Besides that, we will teach you some idioms that you can use to describe someone.

Remember, adjectives are words we use to describe people or things. There are only two positions an adjective can take in a sentence. It can go before the noun which it modifies (beautiful country) or after a linking verb. Linking verbs include: be, look, taste, feel, sound and smell. If the adjective comes after a verb, it is called a predicative adjective and it links the subject to the adjective. Below are a few examples (the verb is bold and the adjective is italic):

First, let’s look at some more sentences and think about their positions. Are they before a noun or after a linking verb? The adjectives are in italic:

The 25 most common adjectives in English

We know that adjectives are extremely important for English learners because they help you express your opinions and describe people, objects, and places. As we have mentioned before, they are also used when we need to make comparisons. You can learn more about comparative adjectives with this guide if you want to know more.

There are hundreds of adjectives in English and you can always work on adding more and more adjectives to your vocabulary. However, there are 25 common adjectives that you must know! Let’s have a look at them below.

What is a personality?

Now that we’ve talked about adjectives in general, let’s get a little bit more specific. The Merriam-Webster Dictionary defines personality as “the complex of characteristics that distinguishes an individual” and “a set of distinctive traits and characteristics.”

With that in mind, let’s go over some of the most common adjectives we use to describe personalities in English. We will focus on positive adjectives in this section. The definitions were adapted from the Cambridge Online Dictionary.

Adjectives to describe personality in English

In this section, you’ll find a list of great adjectives to use to talk about people and their personalities in English. Also, many adjectives that describe personality are synonyms for other, more basic words. In other words, there are different versions of each concept. Think about common words like nice, good, funny, or smart. Can you elevate these words with some new vocabulary from the list below?

Someone who shows feelings of liking or love.

Example: Kyle is an affectionate boy. He always wants to hug and kiss everyone.

Someone who has a strong wish to be successful, powerful, or rich.

Example: I used to be an ambitious person. I wanted to have the best car, the best house, the whole thing. Now I don’t feel that way anymore.

Example: My sister is one of the most  artistic people I’ve ever met. Her paintings are amazing.

Someone who shows no fear of dangerous or difficult things.

Example: My grandma was very brave to learn to drive at 55. She took many lessons, but today she goes everywhere by herself.

Someone who has the power to influence other people and attract their attention and admiration.

Example: He was such a charismatic leader. Everyone really admire his ability to influence others.

Example: I consider myself a clever person. I can learn how to use new softwares quickly.

Example: She was very courageous when she decided to move all the way to New Zealand.

Example: Lucy was makes the most amazing PowerPoint slides. She is so creative!

Someone who is relaxed and not easily upset or worried.

Example: My dad is super easy-going. Nothing makes him mad.

Someone who enjoys being around other people.

Example: Tim is such an extrovert! He loves talking to strangers at parties.

Someone who behaves in a pleasant, kind way toward someone.

Example: Riley is so friendly. She is always ready to help others.

Someone who has a great sense of humour, who makes other people laugh.

Example: My grandpa is always cracking jokes. I think he’s so funny.

Someone who is willing to give money, help, kindness, especially more than is usual or expected.

Example: He donated a good amount of money to the school. He is a very generous man.

Someone who is always doing a lot of work.

Example: My friend Sarah has 4 jobs. She is so hard-working!

Someone you can trust, someone who is not likely to steal, cheat, or lie.

Example: She comes from an honest and hard-working family.

Someone who is able to learn and understand things easily, someone who shows intelligence.

Example: She got into Harvard Law School. I always knew she was intelligent.

Someone who is shy, quiet, and prefers to spend time alone rather than often being with other people; opposite of extrovert.

Example: I don’t like going to parties. I am more of an introvert.

Someone can be trusted or believed because he/she works or behaves well in the way you expect.

Example: My husband is a reliable person. If he says he will do something, I’m sure he will.

Someone who is nervous and uncomfortable around other people.

Example: He was too shy to invite her to prom.

Someone who shows, especially by what they say, that they understand and care about someone else’s suffering.

Example: John also lost a relative to cancer, so he is very sympathetic about my problem.

Someone who talks a lot.

Hannah is always talking. She’s definitely the most talkative person I know.

Someone who has the ability to make good judgments, based on a deep understanding and experience of life.

Example: My grandpa always says that the best part of getting old is that he feels wise.

If you’d like to learn more about describing people, visit this page with games and exercises to practice more English personality vocabulary.

In conclusion, being able to describe your own personality is extremely important for any English learner. We hope this blog post about English personality vocabulary is helpful to you. Let us know in the comment section which adjectives best describe you. See you next time!