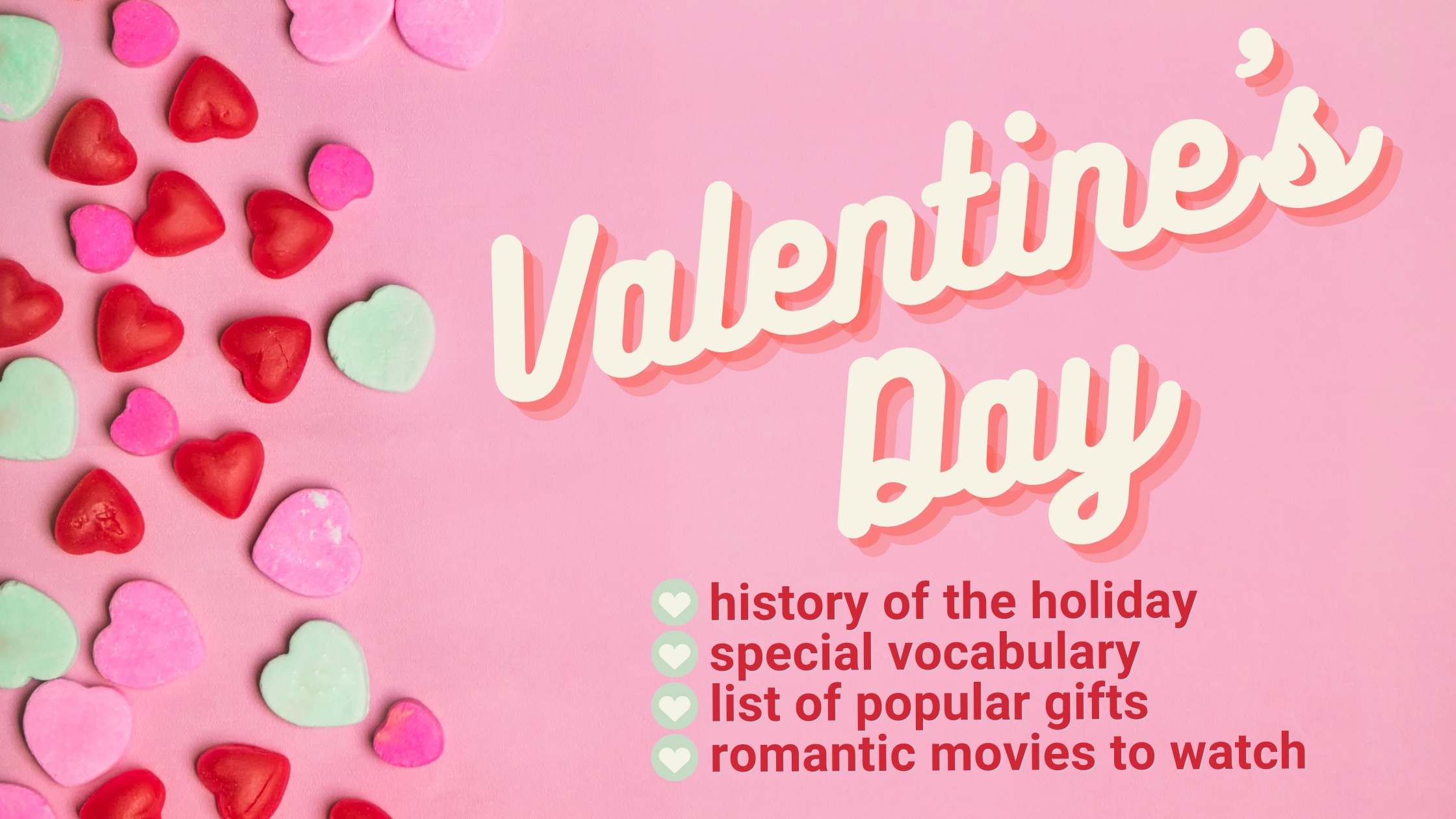 In many countries, February 14 is a day for people to express their love for one another. On this day, known as Valentine’s Day, people exchange cards, chocolates, flowers, stuffed animals and candies, among other gifts. For retailers, it is an important date as well — in 2020, Americans spent a grand total of 27,4 billion dollars in gifts for their loved ones on Valentine’s Day. In this blog post, we will go over the history behind the most romantic day of the year, as well as learn some Valentine’s Day vocabulary in English. Plus, check out some movies about Valentine’s Day.

How it all began

February 14 is known as Valentine’s Day or Saint Valentine’s Day. In some origin stories, it all began in Rome around the year 278 a.d. Under the leadership of Emperor Claudius, or more lovingly known as Claudius the Cruel, Romans were involved in a series of unpopular and violent acts of war. The emperor needed a strong army, but the men were unwilling to join. Claudius attributed this reluctance to men’s devotion to their wives and families.

So, Claudius responded by banning all marriages and engagements. A priest named Valentine crossed the emperor’s decision, and secretly married couples. When Claudius discovered this transgression, he sentenced the priest to death.  While Valentine awaited his fate in prison, people sent him flowers and cards saying that they still believed in love and marriage. On February 14, Saint Valentine was executed. However, nearly 200 years later, Pope Gelasius declared the day Saint Valentine’s Day in honor of the martyred priest.

Some people believe that the origins of the holiday are related to the Christian Church and  the fertility festival known as Lupercalia. Celebrated on February 15, the festival was dedicated to Faunus, the Roman god of agriculture, and to the Roman founders Romulus and Remus. The festival began with the Roman priests gathering at a secret cave to sacrifice a goat, for fertility, and a dog, for purification. After that, all the young women in the city would place their names in a urn and the bachelors would choose a woman to get married.

Cupid, who is often portrayed on Valentine’s Day cards, is related to the Greek God of love, known as Eros. According to Greek poets, Eros was a handsome immortal who used to play with the emotions of men using his golden arrows to incite love. Cupid is commonly portrayed as a chubby child holding a bow and an arrow. Learn more about the history of this holiday.

One thing that surprised me about Valentine’s Day in the United States is that the day isn’t only celebrated by sweethearts (girlfriends, boyfriends, wives, husbands, etc). I was born and raised in Brazil and over here we celebrate this holiday on June 12, but only people in romantic relationships would buy gifts and express their love to their significant others. Valentine’s Day is a whole different experience. Friends share cards and gifts, parents sending flowers to their kids, and even schoolchildren will give their friends candies and cards.

Chocolate and candies are the most popular gifts people buy on Valentine’s Day. You can find heart shaped chocolates boxes, gourmet truffles, and several different kinds of bonbons, which is a chocolate confection.

Greeting cards are the second most common gifts given on Valentine’s Day. Stores like Target and Walmart start selling them weeks before February 14. Hallmark is a company known for its amazing cards. They also sell stationery, gift wrap, and some party supplies. People usually sign their cards with either “Love”, “XOXO” (which means kisses and hugs), or “Your Valentine”.

Besides candies and cards, people will also buy flowers, wine, jewelry, and clothes. It is also common to take your loved one to a concert, a movie, or a romantic dinner. Some people also like to give a homemade gift to their valentines (a valentine is also a word for a romantic partner), which shows how much they care about them. Common handmade gifts are scrapbooks, candy boxes, and snowglobes.

Valentine’s Day is right on the corner — it’s this Sunday, February 14. Do you have plans already? Let us know in the comment section!

Take a look at the table below for some Valentine’s Day vocabulary in English:

There are plenty of movies set around the most romantic day of the year. Here are my Top 3 movies to watch on February 14:

In this movie, A florist, who abides by a strict five-date-limit with any man, finds herself wanting more with the new restaurateur in town. Have you seen My Big Fat Greek Wedding? Well, the same actors from it star on I Hate Valentine’s Day.

This one stars a good amount of famous actors: Julia Roberts, Jessica Alba, Bradley Cooper, Patrick Dempsey, Anne Hathaway and more! The movie follows couples and singles in Los Angeles break-up and make-up based on the pressures and expectations of Valentine’s Day. Some people expected more from this movie, but I think it’s good entertainment.

This is not your usual Valentine’s Day movie, but you should definitely check it out. In this movie, an immature, newly unemployed comic (Jenny Slate) must navigate the murky waters of adulthood after her fling with a graduate student (Jake Lacy) results in an unplanned pregnancy.