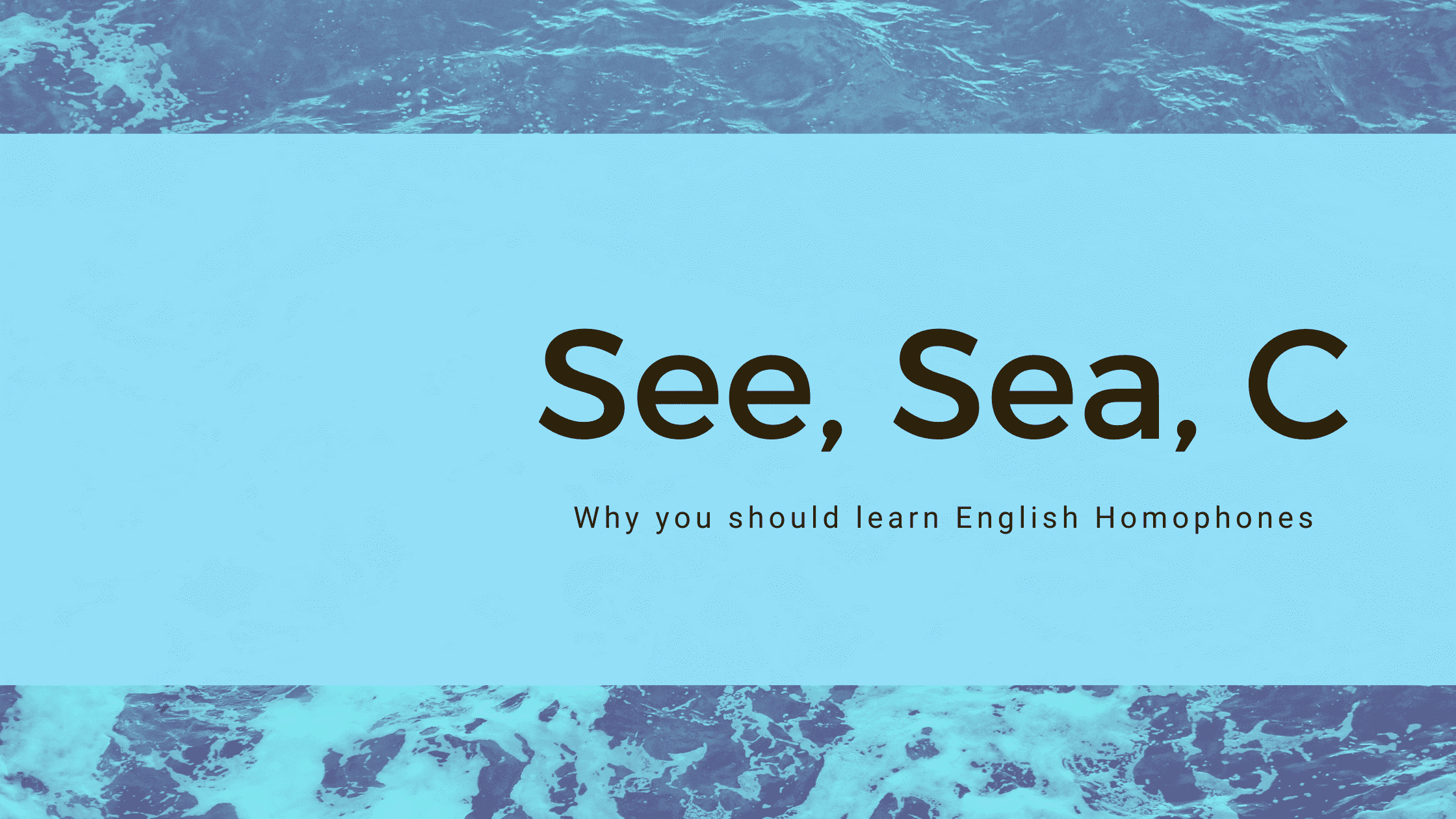 Have you ever wondered why so many English words sound the same? It’s a common question from English language learners. The truth is that English sounds can be made with different combinations of letters. Consider this list of example words. What is similar about them? What is different?

Each pair of words has the same pronunciation, but different spelling. These are homophone words. The meaning of each homophone is different. We eat ‘bread’ on a sandwich, but a horse is ‘bred’ on the farm. We take a coffee ‘break’ in the morning, but we hit the ‘brake’ to slow down the car. The ‘sea’ is a body of water, but we ‘see’ the water with our eyes.

The word homophone itself is based on two Latin roots: homo meaning ‘the same’ and phone meaning ‘voice’.While there are thousands of homophone words, you do not need to learn them all. Some words are not used much in modern English and others are so specific that they are only used within certain industries. Regardless, homophones are really important for English speaking, writing and listening!

So what should you know about homophones?

Have you ever noticed  how people are quick to judge a person’s argument by criticizing language errors? This happens It is conditioned that proper grammar and language usage somehow equals intellectual superiority. This is not true, of course. Grammar is one type of knowledge which helps people accurately use language, but it is not the end-all of intellect by any means. In professional settings though, people expect proper usage.

Accuracy is important but understanding and being understood is the utmost goal of communication. Our courses will help you understand similar sounding words by using them in context. One way to start learning homophones is by using them in sentences.

Play this game below to learn some sets of homophones. If you don’t know the meaning of some of the words, you can use the Cambridge Dictionary to know the exact definition.

Think about the words sea and see. If you understand that sea is a noun and see is a verb, you will know the meaning based on its usage. Think about a simple sentence like Do you see the sea?

The trouble often results from not knowing how or why to use contractions or pronouns. Two of the biggest sets of offenders from the homophone world are: your / you’re and their / there / they’re.

If you want a challenge, try this listening practice. The five sentences will use a pair of homophones. Your task is to correctly write the sentence using the homophones properly.

3. Homophones are often used as examples in puns or simple jokes

As many people think of words in compartmentalized ways, native English speakers rarely consider that one group of sounds may have different spellings. This creates an easy setup for a simple joke that plays into the use of homophones. While the jokes are simple, they are great for teaching English language learners (native or not) how the different spellings can impact the meaning of the word. Here are some simple jokes. Can you identify the matching homophone?

4. Some homophones come from regional pronunciation

If two words have the exact same pronunciation except for one sound, they are called minimal pair. These are very important for language learners to practice in order to improve pronunciation. Common mistakes may vary depending on the native language, but generally the soft vowel sounds create confusion. Think about the differences in these words: ban, ben, bin, bon, bun. Ask yourself, can I accurately say these words by differentiating the vowel sounds? If you are uncertain, then you may want to do some work with minimal pair practice.

In a typical conversation, most people would not mistake ‘I see the sea’ for ‘I sea the sea’ or ‘I see the see’. This example sentence is very clear about the meaning of each word. A more common problem comes when the pronunciation of a group of words in unclear. This occurrence can create oronyms which are groups of words that sound like another group of words. There are countless possibilities due to infinite combinations of words. Take a look at these examples:

So, what can you do to avoid miscommunication with oronyms? The best solution is to ask people to repeat themselves. You can ask, ‘Could you repeat that?’ or ‘What did you mean by…?’ Usually, people will repeat themselves in a slower and more enunciated way, allowing you to hear the difference between two words.

Did you learn enough about homophones to complete these learning activities? Test your knowledge with this little quiz.

What are other English homophones you would like to learn? Do you want to know which other words have the same pronunciation? Let us know in the comments and we’ll create new posts and videos with examples of homophones!