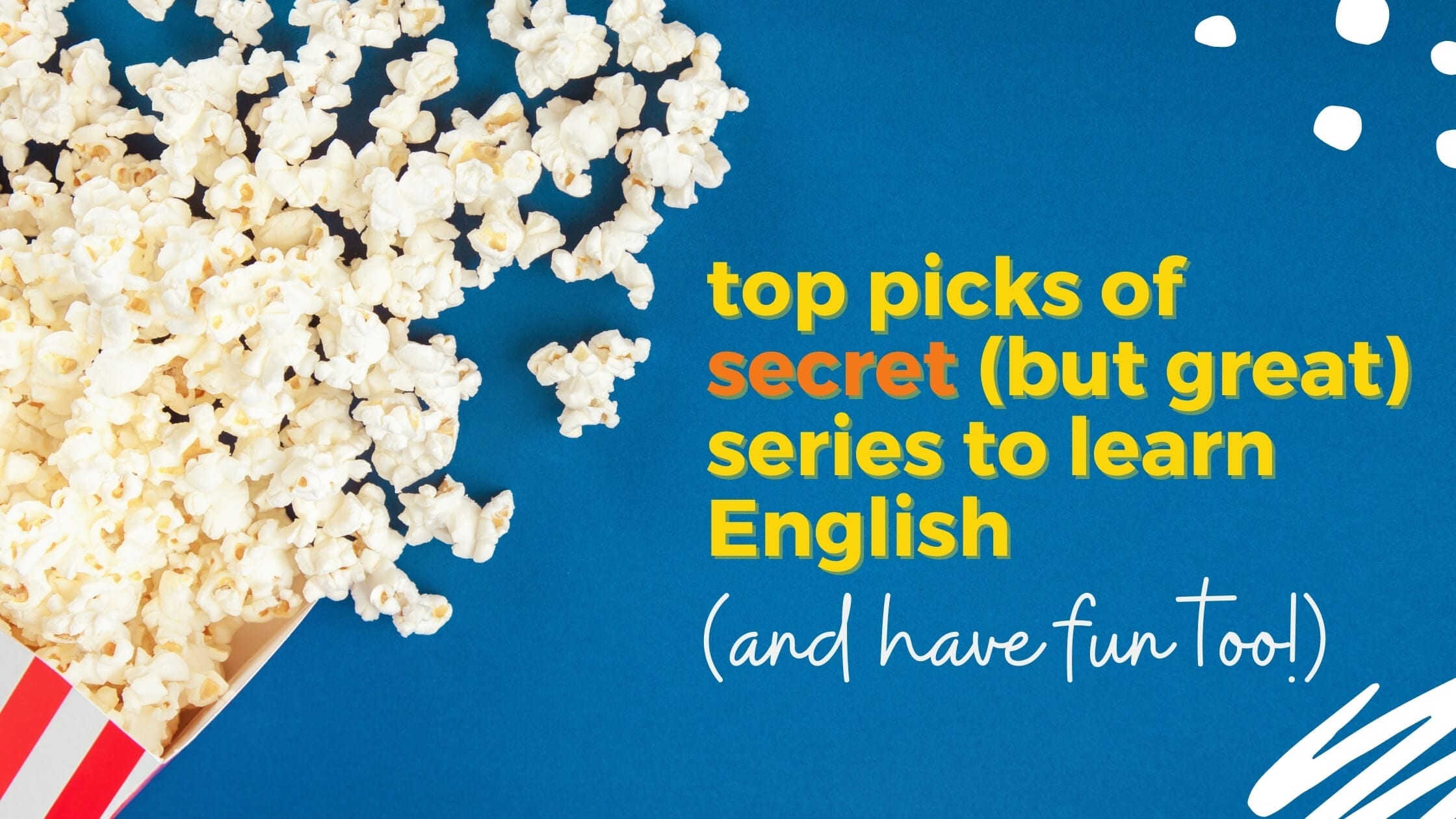 In today’s post, we will share with you 5 secret, but great, TV shows that are perfect for you to learn English and practice your listening skills while having lots of fun. Not to worry, none of those boring recommendations on this list! You’ll be able to show off your pop culture expertise while improving your language skills with these great series to learn English.

TV shows can teach you more English than you might realize

Have you ever wondered how you learned your first language? That’s a question most people never give some thought to, right? However, the answer can definitely help us understand how our brains learn a language and support our own journies as English students.

Children learn language through acquisition or exposure to it over time. They hear and see models of their first language and imitate that until they have the knowledge to form sentences over time. The same can be true for adults, but adults often forget how to acquire language.

According to Dr. Bruce Perry, “there is no genetic code that leads a child to speak English or Spanish or Japanese. Language is learned”. We learn a language by listening, practicing, and repeating. It is not something that we are born with. We listen to our parents and we model the rhythm, tone, volume, and even non-verbal expressions they make.

Since we learned our mother language by listening, practicing and repeating, it is safe to say we can apply those three actions when learning English or any other second language. Instead of mimicking our parents, we now can mimic someone else. Tutors, friends, characters, actors and actresses… We have to listen, listen, listen. Eventually, we will be repeating sentences, developing our own tone and volume, and becoming more and more confident when speaking English.

The takeaway here: in addition to studying English through structured courses, you should also be exposing yourself to as much English language as possible. Luckily, we have an endless supply of movies and series to learn English that can give you that opportunity. Not all series are created equally though, and so check out this list of five great, lesser-known shows that will help you acquire more English language.

This British comedy series is brand-new and is a great pick for intermediate students learning English. Released in May 2020, this show follows Jason and Nikki, a couple who decides to adopt a child after several failed attempts to have their own baby. The show also talks about the 30-something life crisis. Nikki (Esther Smith) is such a great character — I’m sure you will relate to her on some level, even if having a kid is not in your plans. The eight episodes are available on AppleTV+ and the good news is this English series was renewed for a second season, which should be available next year.

This is one of the best coming-of-age shows I have watched in a long time. It will definitely help you improve your English. It was released back in May 2018, but I only found out about it recently. The show is about Tess (Ella Purnell), a 22-year-old girl who moves from a small town in Ohio to New York City and lands a job at a famous downtown restaurant. She is then introduced to a world of drinking, drugs, bars, and fine dining. The series is based on a book of the same name by Stephanie Danler. The two seasons are available on the streaming platform StarzPlay. This is a great series to learn English!

Who doesn’t love a good crime series? This one tells the story of Jacob, a 14-year-old boy who is accused of murdering a classmate in the park near his house. The actor Chris Evans plays Jacob’s dad, the assistant district attorney who sees his life turn upside down after evidence points to his son as the prime suspect. The 8-episode show aired last April and received good reviews from the critics and the public. If you enjoy solving puzzles, we highly recommend you watch this series. You can watch all episodes on AppleTV+.

This is such an intriguing English series! Check out the plot: a Philadelphia couple decides to hire a nanny to help them with their 13-week-old son, which is a reborn doll. The mother, Dorothy, believes the doll is her real child. The nanny, Leanne, turns out to be very suspicious. Sounds crazy, right? Well, it is kind of bizarre, but engaging at the same time. If you enjoy a psychological thriller, don’t forget to check out this TV show on AppleTV+.

5. The Truth about the Harry Quebert Affair, streaming on different platforms across the world

Based on the very popular book of the same name released in 2014, this series tells the story of a young writer who starts investigating a crime his college professor and mentor, Harry Quebert, is being accused of. Police believe Mr. Quebert, an extremely famous writer, murdered a 15-year-old girl in a little town in the state of Maine a few years prior. Harry Quebert is played by the Grey’s Anatomy former star Patrick Dempsey. The 10 episodes are available on different streaming platforms across the world. You can find out where to watch it in your country through the website Just Watch.

What other TV shows and series are worthing mentioning in this list of recommendations? Have they helped you learn English? How do you learn English with TV series? Comment below with thoughts and your own top picks! Also, check out this blog post on how podcasts can help you learn English.