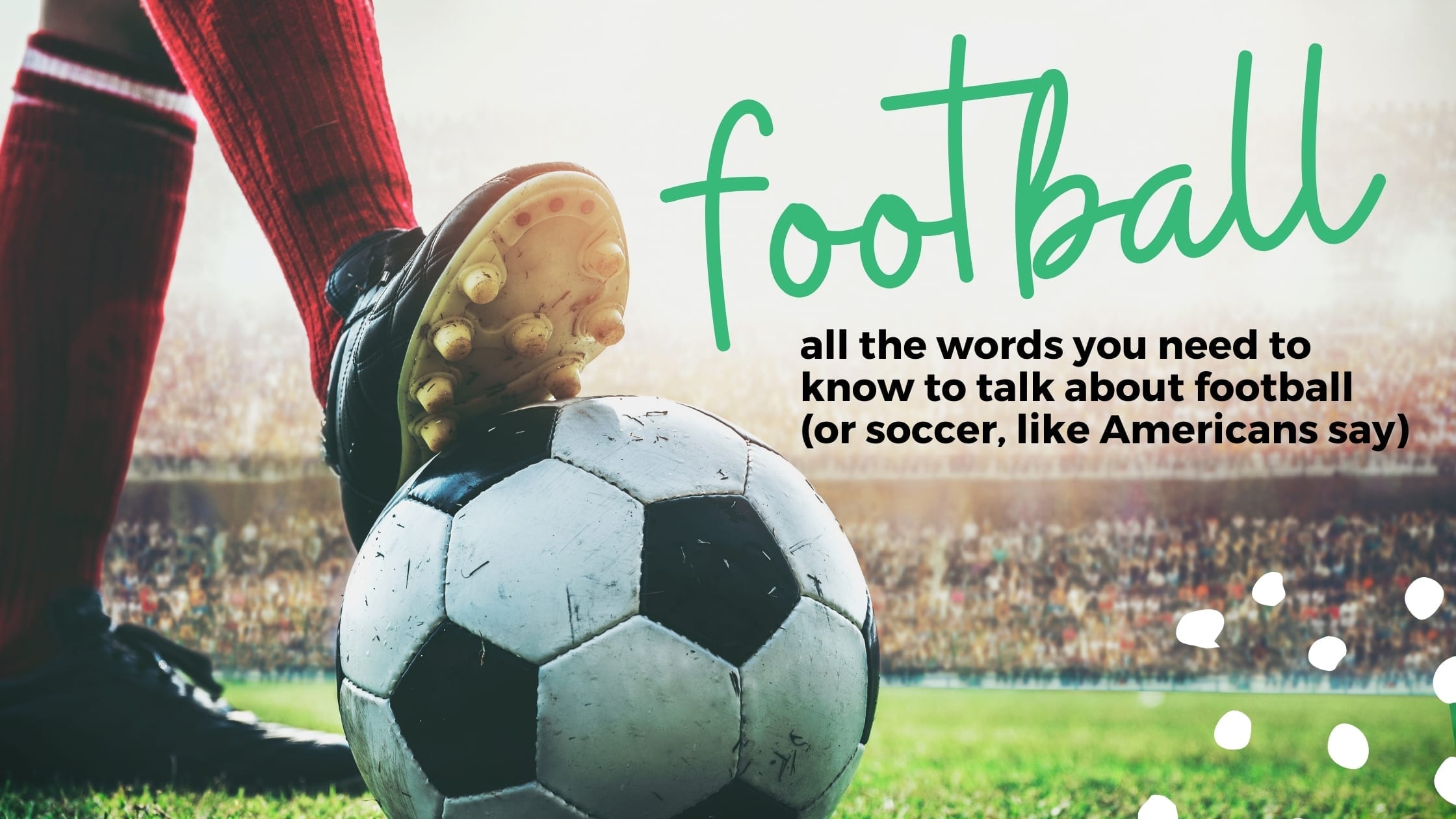 Football is the most popular sport in the world and if you ever want to watch a match in English, you will need to know the terms in order to understand the narrator of the game. Keep reading for an extensive list of football vocabulary in English, some history about the sport, and an explanation of what is the correct way to call this sport (soccer or football?).

The first thing you need to know about me is that I was born and raised in Brazil. That means I take football seriously. Wednesdays nights and Sunday afternoons are sacred — if you turn on the TV, a football match will be underway. The World Cup is another major thing for us here. School is canceled on the days Brazil plays. I also remember the afternoon of July 8th, 2014. If you, like me, are a football fan you know what I am talking about. If that’s not your case, I will explain it. On that day Brazil lost the semifinal of the 2014 FIFA World Cup, which was being held in Brazil, by 7-1 to Germany.

Ok, enough about me. Let’s start by answering one of the most common questions about football. Is is ‘soccer’ or ‘football’?

The name of the game: is it ‘soccer’ or ‘football’?

There are many differences between American English and British English We have covered some of them here on the PrepEng blog — color or colour and grey or gray, for instance.

However, one would say the best-known difference is that Americans call the most popular sport in the world ‘soccer’, while British call it ‘football’. Actually, before we go on, it is important to mention that Canada, Australia, New Zealand, and South Africa also refer to the game Cristiano Ronaldo, Messi, and Neymar play as ‘soccer’.

The funny thing is: the word soccer originated in England. Back in the 19th century, the word ‘football’ was used to refer to the game as we know today. One day, during a football match, the young player William Webb Ellis decided to take the ball into his hands and started running

towards the goal. The game happened in a field in the Rugby School, in England. People seem to like Ellis’ idea and the game ‘rugby football’ was created. Now they had two different games they could play: rugby football and associated football (which is the one we play nowadays).

There are many words and phrases you should know to understand a football match in English. We have divided them into nine sections including the place where they play, the referees, the positions on the team, the equipment, the match, the stages of a competition, scores, expressions, and important events.

The pitch is where the game takes place. In American English, the pitch is referred to as ‘field’. Look at the image below and try to identify each part of a football pitch.

Every team has at least two kits: the home kit and the away kit. The home kit is the main uniform players wear for a match. The away kit is the second option and it is used to prevent teams from wearing similar colors, which avoid confusion between officials, players, and spectators. There is also a third kit, which is often pretty different from the other two.

Let’s take a look at Real Madrid’s kits for 2020/2021. The home kit is white, the away kit is pink, and the third kit, which was announced early September, is a black and grey pattern inspired by tile paintings found in the Spanish capital.

Every game has rules. The person who is responsible for spotting any violation to those rules during a soccer match is called a referee. Besides the referee, there are other 3 officials present during the match: 2 assistant referees and 1 fourth official.

The assistant referee (also known as ‘linesman’) patrols the touch lines and responsible for signaling when a player is in an offside position. The fourth official keeps track of all the stoppages during the game and verifies all the substitutions made during the game.

Football vocabulary about the match

If you want to discuss a football match with your friends, you ought to know the English terms for each time period within the game. Read these descriptions of each vocabulary term to learn them.

The game starts with the toss-up. Before the football game starts, the referee throws a coin in the air. The captain who wins the toss-up decides which half to play on.

The kick-off is the start of the game. The ball must be stationary and on the centre spot. All players, except for the kicker, must be in their own half of the field of play, and all opposing players must remain away from the ball until it is in play.

How long does a match last for?

Half-time is what we call the break that the two teams have after the first half of the match.

The second half is after half time, when the teams go back to the pitch for the last 45 minutes.

Full-time is the end of the 90 minutes.

Injury time is whenever some time is added on after full time because of interruptions that may occur during the match.

The final whistle is when the referee blows the whistle to signal that the game is over.

Who are the football players?

Learning the vocabulary about football players in English is a common request from students. Some of these terms are specific only to football or soccer, so read on. Can you tell us who your favorite footballer is? Leave a comment with their name and position.

Stages of a football competition

Has your favorite football team made it to a competition? I hope so! Let’s learn the vocabulary about competition stages for football games.

Some soccer tournaments are divided into phases. The stages of a competition can vary according to the type of tournament. In the World Cup, for instance, the group stage is formed by 32 national teams that are divided into 8 groups of 4 teams each. The teams in each group face each other within the group and only 2 out of the 4 qualify for what we call the ‘knock-out’ stages. The first ‘knock-out’ stage is the ’round of 16′ which is composed by 16 teams. After 8 games, the winner of each game qualifies for the ‘quarter-finals’. Four teams then play the ‘semi-finals’. Two of those teams proceed to the ‘final match’. The other 2 teams play the ‘third-place playoff’.

A common question people ask when watching a football game is: “so, what’s the score?” You can give the actual numbers of course, but there is some specific football vocabulary in English to describe zero points or a tie score. Can you see what those words are?

This is how you answer this question according to the results of the match:

7-1 is considered a thrashing. One can say:

If somebody that hasn’t watched the game asks you “so, what was the score?”, you can say:

These are some common football phrases you may hear from commentators when you are watching a match.

The most important football events

The World Cup is organized by FIFA (Fédération Internationale de Football Association) and it happens every four years since 1930, except in 1942 and in 1946 because of World War II. After a qualification phase, which happens in the three years prior to the competition, 32 teams, including the host country national team, compete for about a month in order to become the next champion.

Brazil has won the title five times, Germany and Italy have won four times each, Argentina, France, and Uruguay have two titles each, and England and Spain have one title. The current champion is France, which won the title over Croatia in the 2018 Russia World Cup. The next World Cup will take place in Qatar in 2022.

This competition, organized annually by the Union of European Football Associations, is one of the most prestigious football tournaments in the world. It started back in 1955 and it was rebranded in 1992. The Spanish team Real Madrid has won the UEFA Champions League 13 times. Bayern Munich is the current champion.

Wow that is a lot of football vocabulary! Did you learn some new words? One of the best ways to practice is by watching a match and trying to describe what happens. You could be your own personal football commentator!

We hope these lists and exercises about football (or soccer, if you prefer) vocabulary in English help you while watching games on TV or talking about it with friends. Do you have a favorite team? Let us know in the comment section!