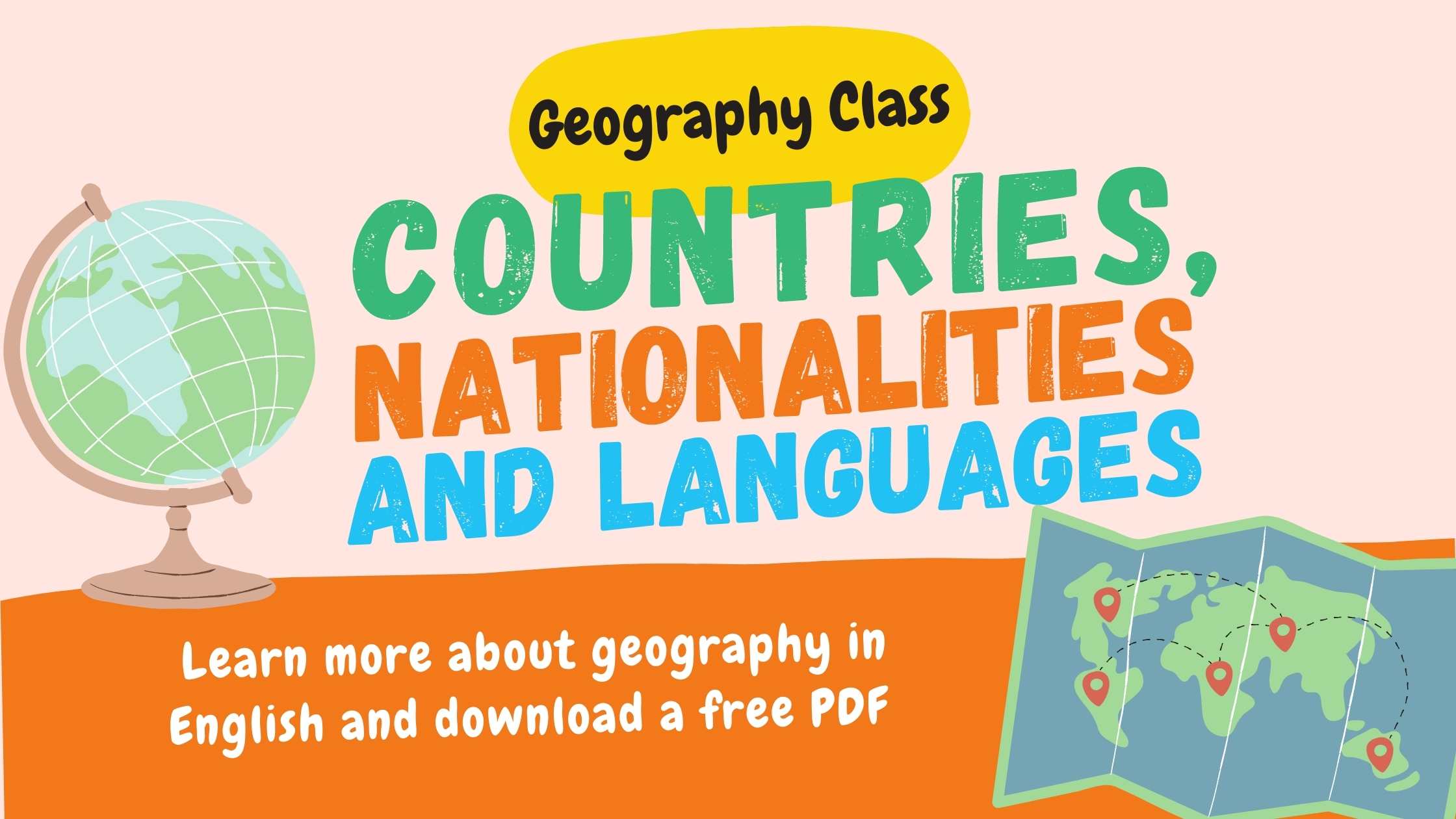 Think of this article as a World Geography 101 class in English. You will learn how to say the names of the continents in English, how to ask and answer questions about your nationality, plus, we will go over the use of the article ‘the’ before the names of the countries. There is even a free PDF ebook at the end of this post with a complete list of countries, nationalities and their languages for you to download!

This topic is important because one of the most common questions we hear when traveling abroad is ‘Where are you from?” Being able to answer this question without hesitation is essential to anyone who is learning English. Besides saying the country where you are from, you may also want to tell people about your native language and even share some information about the most famous tourist attractions in your country so that they can pay you a visit someday. Shall we get started?

Continents and countries in English

Maybe you are still in high school, or perhaps you finished that a long time ago, but I suppose you remember some of the things you learned from your geography teacher. If you don’t, we’ve got you covered!

Let’s start off with the definition of continent. According to the Merriam-Webster Dictionary, a continent is “one of the six or seven great divisions of land on the globe”. However, the Encyclopaedia Britannica defines it as one of the larger continuous masses of land, namely, Asia, Africa, North America, South America, Antarctica, Europe, and Australia, listed in order of size.

The thing is: your answer to the question “how many continents are there in the World?” depends on where you grew up. For Americans, there are seven (Africa, Antarctica, Asia, Australia, Europe, North America, and South America). For most of the world, there are actually six continents: Africa, Antarctica, Asia, Oceania, Europe, and America. Some other people may even consider that there are 5 continents (Africa, Europe, Asia, America and Oceania), which represents the five rings on the Olympic Flag. In your opinion, are there 5 or 7 continents in the world?

This is an on-going discussion, so let’s go back to learning how to say the names of the continents in English. Check out the seven continents below.

Africa is the second largest and second most populated continent in the world, after Asia on both counts. There are 54 countries in Africa, plus two disputed territories. This continent can be divided into five regions.

Antarctica is the lowest populated continent, with only about 4,490 people living there. There are no countries in Antarctica.

The biggest continent is Asia, which can be divided into five distinct regions. Let’s check out what are the countries in Asia.

Oceania is a continent or a geographic region, depending on who you ask. It covers Australasia, Melanesia, Micronesia and Polynesia.

Europe, also referred to as the ‘Old World’, can be divided into five regions:

America can be divided into three regions:

The most famous tourist attractions in each continent

We will now take a look at the most popular tourist attractions in each of the continents. That way, if you ever plan a visit to those places you will know how to refer to them in English. We know there are many places one should visit, so we selected only a few to put here, especially those whose names change from language to language. Please let us know in the comment section what place we cannot miss whenever visiting your country!

Names of countries in English

There are 193 countries in the world that are recognized members of the United Nations, also known as the UN. Besides that, there are two UN observer states, which are the Holy See (also known as the Vatican) and the State of Palestine. The observer status is a privilege granted by the UN to non-members to give them the ability to participate in the organization’s activities. The latest member nation to be admitted to the United Nations was South Sudan, which was recognized as a country in 2011.

Among those 193 countries, there are 19 which form the G20 (or Group of Twenty). This group, which was founded back in 1999, is an international forum composed of the governments from 19 countries and the European Union (EU). The G20 summit is held annually.

Let’s take a look at those 19 countries:

The world’s most visited countries are, in order of number of tourists, France, Spain, the United States, China, Italy, Turkey, Mexico, Germany, Thailand, and the United Kingdom.

Using the with the names of countries

Incorrect: My mother is from the Brazil.

Correct: My mother is from Brazil.

However, we do need to add ‘the’ before countries whose names are plural, such as the Netherlands. We also add ‘the’ if the country’s name includes the words ‘state’, ‘republic’, or ‘kingdom’, such as the United States.

We never use ‘the’ before the names of continents, islands, cities, and states.

We use the article ‘the’ before the names of points on the globe, such as the Equator, names of island chains, like the Cayman Islands, and geographical areas, such as the Midwest.

Here are the countries we need to add ‘the’ before the name:

Talking about nationalities in English

According to the Cambridge Dictionary, nationality is the state of belonging to a particular country or being a citizen of a particular nation. However, if you are curious about someone’s nationality, you would not ask:

The most common question would be:

Where are you from?

The person has two alternatives when answering this question.

They can say: I’m from Sweden or I’m Swedish.

She is from Argentina = She is Argentinian.

They are from Japan = They are Japanese.

It is important to remember that all countries, languages, and nationalities need to be capitalized in English. That is, those names need to start with a capital letter.

Here is a countries and nationalities pdf for you to download for free!

Let us know in the comment section the country you are from, will you? We hope all this information about countries and nationalities in English helps you talk about the place where you come from with no hesitation. Happy studying!