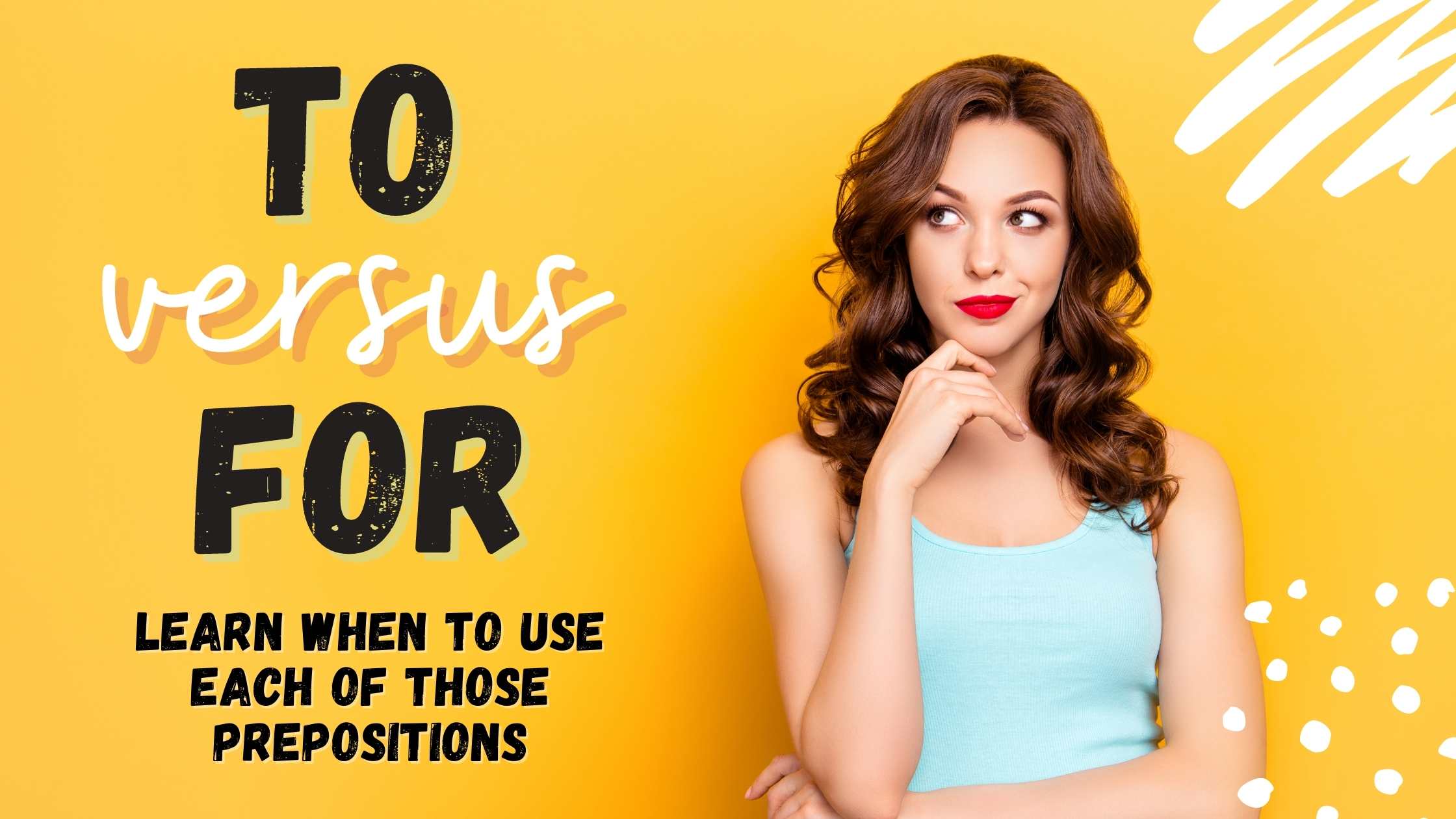 Have ever found yourself in doubt about how to use to and for in English? I’m here to tell you that you’re not alone, my friend! Prepositions like these can be difficult to use correctly. In this post, we will tackle one of the most common questions when it comes to prepositions in English: to versus for. There are also tons of examples and exercises with to and for so you can check your knowledge about this topic at the end of this post! Let’s finally understand the differences between to and for, shall we?

How to use English prepositions

When learning a language, you will often read about nouns, verbs, adjectives, and so on. These are what we call parts of speech. We have eight parts of speech in the English language: noun, verb, adjective, adverb, pronoun, preposition, conjunction, and interjection. Unless you are a grammar nerd, it is okay to be confused about them. Let’s go ahead and explore one of those parts of speech — the preposition.

Prepositions are usually followed by a noun or a pronoun. They demonstrate the relationship between a noun or a pronoun with another word. There are more than 100 prepositions in the English language. Some of the most common ones are: about, after, at, before, behind, between, for, from, in, of, on, since, to, under, and with. Since there are so many of them, we often divide the prepositions into eight categories: time, place, direction or movement, manner, agent or instrument, measure, source, and possession. Don’t worry though, the easiest way to learn them is by looking at the use of prepositions with examples.

To: uses and examples in English

Use to to talk about reasons and purpose. This answers a “why” question. Why did you go home? I went home to see my mother.

Here are some more examples of how to use to for reasons or purpose:

#2 – Wishing something to someone

If you need to share congratulations, greetings or wishes to someone, use the preposition to.

Here are some more examples of how to use to to wish something to someone.

#3 – When talking about giving something to someone

Use to to identify the person who receives something. We often use to this way with the verbs give, hand, send, and write.

Here are some examples.

#4 – To make the infinitive form of a verb

#5 – When talking about destination or movement towards somewhere

If you are describing your destination, you probably need to use to as a preposition to identify the place.

Here are some examples:

Sometimes, you may be describing a destination but should not use to. Here are some words that do not use to. These are adverbs of place.

#6 – When talking about time

Some time phrases use the word to. Here are some examples.

If you are not sure about the exact price, time or number of something, you can use to between two numbers to make it approximate.

#8 – After certain verbs and verb phrases

After some verbs, you need to use the word to. Some verbs include: be used, get used, listen, look forward, object, reply, and respond.

Here are some examples

#9 – After some adjectives related to people’s behavior,

Sometimes with some adjectives about people’s behavior, you should use to. Some of these adjectives are: cruel, faithful, generous, kind, and loyal

For: uses and examples

You can use for to talk about reasons and purposes also, but not with action verbs. Use for with nouns like events, plans, or gerunds (verb + ing).

Here are some examples of using for to describe purpose or reason:

#2 – When talking about someone who received something

If you are describing the beneficiary of a gift, you can use for.

Here are some examples of using for to describe who was given a gift.

If you need to describe the duration of time (seconds, hours, days, months, years), you should use for.

Here are some examples of using for to describe duration of time:

#4 – When referring to exchange

Exchange refers to changing to items for equal or nearly equal value. Use for to describe the relationship between the items.

#5 – To express support or agreement

Many people will use for to describe something they believe in. The structure of this is: subject + to be + for + idea

Here are some examples of using for to express support:

Talking about reasons and purposes: to or for?

You have probably noticed that we use both to and for to talk about reasons and purposes. You are probably wondering…how will I know which one I should use?

Let’s take a look at two examples we gave above.

I will meet Adam for lunch tomorrow.

I hired a tutor to help me learn French.

Are you ready to test yourself? Try these to vs for exercises.

Take a look at the sentences below and fill in the blanks with either to or for.

We hope this blog post helps you understand the differences between to and for. Practice everything you’ve learned with these prepositions in English with the exercises and examples above! Happy studying, guys!